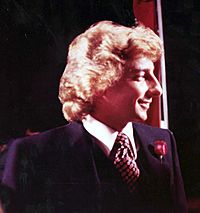 Barry Manilow (born June 17, 1943 in Brooklyn, New York City) is an American singer-songwriter and musician. He is best known for songs such as "Could It Be Magic", "Mandy", "Can't Smile Without You", and "Copacabana (At the Copa)". 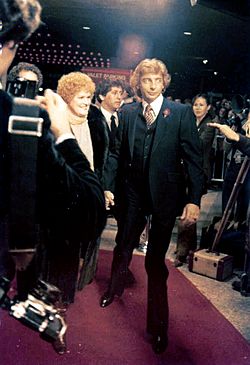 Manilow officially came out as gay in April 2017, telling People that he had kept his sexual orientation quiet out of concern that it would disappoint his largely female fan base, but when his fans learned of the marriage, they were supportive.

All content from Kiddle encyclopedia articles (including the article images and facts) can be freely used under Attribution-ShareAlike license, unless stated otherwise. Cite this article:
Barry Manilow Facts for Kids. Kiddle Encyclopedia.