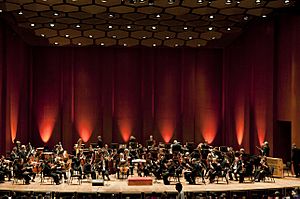 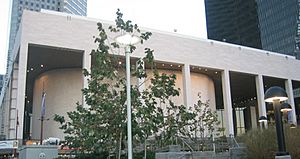 The Houston Symphony is a Grammy Award winning orchestra based in Houston, Texas. Since 1966, it has performed at the Jesse H. Jones Hall for the Performing Arts in downtown Houston.

The first concert of what was to become the Houston Symphony took place on June 21, 1913, sponsored by the Houston philanthropist Ima Hogg. Initially, the orchestra was composed of only 35 part-time musicians. Despite its small stature and budget, the orchestra and its first conductor, Julien Paul Blitz, enjoyed a good response and continued to perform. Blitz conducted until 1916, then Paul Bergé, until the orchestra disbanded in 1918.

The orchestra reformed in 1930, still as a semi-professional orchestra, and gave its first full season of concerts the following year conducted by Uriel Nespoli. In the spring of 1936 the symphony society officially became the Houston Symphony Society. Ernst Hoffmann began his tenure that year with increased support from the Society and began hiring professional musicians. The orchestra continued to expand over the next several decades, and its first 52-week contract was signed in 1971.

Leopold Stokowski was music director from 1955 to 1961. During his tenure, the Houston Symphony gave the American premiere of the Symphony No 11 of Dmitri Shostakovich, and subsequently made the first commercial recording of the work.

When Stokowski invited African-American opera singer Shirley Verrett to sing with the Houston Symphony in the early 1960s, he was forced to rescind his invitation when the orchestra board refused to accept a black soloist. Stokowski later made amends by giving her a prestigious date with the Philadelphia Orchestra.

The orchestra performed in either the City Auditorium or the Music Hall until the construction in 1966 of the Jesse H. Jones Hall for the Performing Arts. In 2001, the orchestra lost millions of dollars' worth of instruments, music, and archives when Tropical Storm Allison flooded the basement levels of Jones Hall. In 2003, the musicians went on strike for 24 days, and the settlement included a pay cut for the musicians and a reduction in the size of the orchestra.

Notable musicians, past and present

The following Houston Symphony musicians have articles in Wikipedia:

All content from Kiddle encyclopedia articles (including the article images and facts) can be freely used under Attribution-ShareAlike license, unless stated otherwise. Cite this article:
Houston Symphony Facts for Kids. Kiddle Encyclopedia.