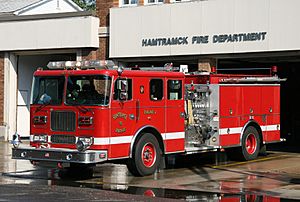 Hamtramck ( ham-TRAM-ik) is a city in Wayne County of the U.S. state of Michigan. As of the 2010 census, the city population was 22,423. Hamtramck is surrounded by the city of Detroit except for a small portion of the western border that touches the similarly surrounded city of Highland Park.

Known in the 20th century as a vibrant center of Polish American life and culture, Hamtramck has continued to attract immigrants. In 2015 its city council became the first majority Muslim city council in the U.S.

Hamtramck is named for the French-Canadian soldier Jean François Hamtramck who was the first American commander of Fort Shelby, the fortification at Detroit. It was originally known as Hamtramck Township.

Hamtramck was originally settled by German farmers, but Polish immigrants flooded into the area when the Dodge Brothers plant opened in 1914. Poles used to make up a large proportion of the population. It is sometimes confused with Poletown, a traditional Polish neighborhood, which used to lie mostly in the city of Detroit and includes a small part of Hamtramck. As of the 2010 American Community Survey, 14.5% of Hamtramck's population is of Polish origin; in 1970, it was 90% Polish.

Over the past thirty years, a large number of immigrants from the Middle East (especially Yemen), South Asia (especially Bangladesh), and Southeastern Europe (especially Bosnia and Herzegovina) have moved to the city. As of the 2010 American Community Survey, the city's foreign born population stood at 41.1%, making it Michigan's most internationally diverse city (see more at Demographics below). The population was 43,355 in the 1950 Census, and 18,372 in 1990.

Hamtramck was primarily farmland, although the Detroit Stove Works employed 1,300 workers to manufacture stoves. In 1901, part of the township incorporated as a village to gain more control over the settlement's affairs, and by 1922 the village reincorporated as a city to fend off annexation attempts by the neighboring city of Detroit. By the mid-1920s, 78% of the residents of Hamtramck owned their own houses or were buying their houses. Around that time, the factory workers made up 85% of Hamtramck's heads of households. Of those factory workers, half were not skilled. In 1910, the newly founded Dodge Main assembly plant created jobs for thousands of workers and led to additional millions of dollars in the city. Dodge Main quickly expanded and became important to Hamtramck. Before the construction of Dodge Main, Hamtramck was a largely rural town. With the Dodge Main assembly plant also came a large Polish population. The influx of Polish immigrants pushed the incumbent German politicians. It was at this point that Hamtramck was considered a Polish-American town. Elections in November 2015 made the city the first to elect a Muslim-majority council in the country.

According to the United States Census Bureau, the city has a total area of 2.09 square miles (5.41 km2), all land.

Hamtramck flourished from 1910 to 1920 as thousands of European immigrants, particularly Poles, were attracted by the growing automobile industry. The city has grown increasingly ethnically diverse but still bears many reminders of its Polish ancestry in family names, street names and businesses. A recent survey found 26 native languages spoken by Hamtramck schoolchildren. The city's motto was "A League of Nations". Neal Rubin of The Detroit News wrote in 2010 that despite the demographic changes, "In a lot of ways, Hamtramck still feels like a Polish enclave."

In 1987 Detroit television station WDIV ran one episode of a local sit-com called "Hamtramck" which featured former Detroit Tigers pitcher Dave Rozema and a cameo by manager Sparky Anderson. It was met by poor reviews and protests by many Polish-Americans and was canceled before airing a second episode.

At the time of the 2000 census, Hamtramck was again experiencing considerable growth, with over 8,000 households and a population of almost 23,000.

The 8,000-square-foot (740 m2) Hamtramck Historical Museum and the Polish Art Center are next door to one another.

In 1997, the Utne Reader named Hamtramck one of "the 15 hippest neighborhoods in the U.S. and Canada" in part for its punk and alternative music scene, its Buddhist temple, its cultural diversity, and its laid back blue-collar neighborhoods. And in May 2003, Maxim Blender selected Hamtramck as the second "Most Rock N' Roll City" in the U.S., behind Williamsburg in Brooklyn, New York City. Hamtramck is home of several of Michigan's most distinguished music venues.

In January 2004, members of the Al-Islah Islamic Center requested permission to use loudspeakers for the purpose of broadcasting the Islamic call to prayer. This request set off a contentious debate in the city, about the noise that would be caused by the call to prayer, eventually garnering national attention. Ultimately, Hamtramck amended its noise ordinance in July 2004 regulating all religious sounds.

Hamtramck Disneyland, an art installation, is in the city.

The "Hamtramck Music Festival" is an annual Independent music festival held in March in Hamtramck. It is currently sponsored by Bens Encore and the local Artist Community. In 2011, almost 200 bands played the Blowout at 14 venues over four days.

Held annually in the first weekend in May at grounds at St. Florian Church.

Held at the Planet Ant Theater, the festival celebrates independent movies and the people who make them, featuring comedies, dramas, documentaries, animation and music videos.

There were 7,063 households of which 43.2% had children under the age of 18 living with them, 40.3% were married couples living together, 18.1% had a female householder with no husband present, 7.0% had a male householder with no wife present, and 34.7% were non-families. 28.9% of all households were made up of individuals and 9.2% had someone living alone who was 65 years of age or older. The average household size was 3.09 and the average family size was 3.98.

Historically Hamtramck received a lot of immigration from Eastern Europe. In the 20th century Hamtramck was mostly Polish. George Tysh of the Metro Times stated that "In the early days of the auto industry, Hamtramck’s population swelled with Poles, so much so that you were more likely to hear Polish spoken on Joseph Campau than any other tongue." Later waves of immigration brought Albanians, Bosnians, Macedonians, Ukrainians, and Yemenis. By 2001 many Bangladeshis, Bosnians, and Iraqi Chaldeans were moving to Hamtramck. As of 2011 almost one in five Hamtramck residents was Asian. As of 2003, over 30 languages are spoken in Hamtramck and more than four religions are present. The four principal religions are, Islam, Christianity, Hinduism and Buddhism.

In June, 2013, the city's Human Relations Commission facilitated the raising of flags of 18 countries from which Hamtramck residents emigrated. They are displayed on Joseph Campau Street, with an American flag flying at either end. 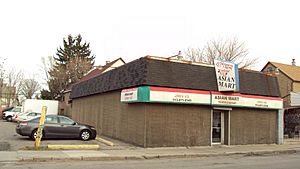 In the 1930s, the first group of Bengalis came to Detroit and Hamtramck. The first significant population of Bengalis began arriving in the late 1980s and the Bengalis became a large part of the city's population in the 1990s. The largest growth occurred in the 1990s and 2000s. By 2001 many Bangladeshi Americans had moved from New York City, particularly Astoria, Queens, to Hamtramck and the east side of Detroit. Many moved because of lower costs of living, larger amounts of space, work available in small factories, and the large Muslim community in Metro Detroit. Many Bangladeshi Americans who moved into Queens, and then onwards to Metro Detroit had origins in Sylhet.

In 2002, over 80% of the Bangladeshi population within Wayne, Oakland, and Macomb counties lived in Hamtramck and some surrounding neighborhoods in Detroit. That area overall had almost 1,500 ethnic Bangladeshis, almost 75% of Bangladeshis in the entire State of Michigan.

By 2002, a Bengali business district formed along Conant Avenue and some residents called it "Little Bengal". The district, along Caniff and Conant streets, included markets, stores, mosques, and bakeries owned by Bangladeshis, Indians, and Pakistanis. By 2008 the Bengali business district, between Davison and Harold Street, and partially within the city limits of Detroit, received the honorary title "Bangladesh Avenue" and was to be dedicated as such on November 8, 2008. Akikul H. Shamin, the president of the Bangladesh Association of Michigan, estimated that Bangladeshi people operate 80% of the buildings and businesses in the portion of Conant Avenue. As of February 2008 the city planned to erect signage reading "Bangladesh Town" in the business district.

In 2002, the estimate of Hamtramck inhabitants of origins from the Indian subcontinent was from 7,000 to 10,000. As of 2001, 900 registered students who spoke Bengali and Urdu attended Hamtramck Public Schools. 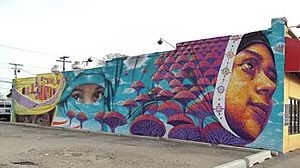 As of 2006, most of the Middle Eastern population in Hamtramck is Yemeni. Hakim Almasmari wrote in 2006 that "Several streets seem to be populated exclusively by Yemeni Americans, and Yemeni culture pervades the city’s social, business, and political life." Many Yemeni restaurants are in Hamtramck, and the Yemeni community operates the Mu'ath bin Jabal Mosque (Arabic: مسجد معاذ بن جبل‎code: ar is deprecated ), which was established in 1976. In 2005 the mosque, located just outside the south eastern border of Hamtramck, was the largest mosque out of the ten within a three-mile radius.

In 2013 Dasic Fernandez, a Chilean artist, created a 90-foot (27 m) by 30-foot (9.1 m) mural on the Sheeba restaurant celebrating the Yemeni population. The mural depicts a girl in a veil decorated with the blue sky, a farmer wearing a turban, and a woman in a hijab. The Arab American and Chaldean Council and the coalition OneHamtramck commissioned the mural.

In the 2000s a Bengali mosque named the Al-Islah Jamee Masjid wanted permission to broadcast the adhan, the Islamic call to prayer, from loudspeakers outside of the mosque and requested this permission from the city government. It was one of the newer mosques in Hamtramck. Sally Howell, author of "Competing for Muslims: New Strategies for Urban Renewal in Detroit", wrote that the request "brought to a head simmering Islamophobic sentiments" in Hamtramck. Muslims and interfaith activists supported the mosque. Some anti-Muslim activists, including some from other states including Kentucky and Ohio, participated in the controversy. Howell added that the controversy, through an "international media storm", gave "a cathartic test of the "freedoms" we were said to be "fighting for" in Afghanistan and Iraq" to the remainder of the United States. In 2004 the city council voted unanimously to allow mosques to broadcast the adhan on public streets, making it one of the few U.S. cities to allow this to occur. Some individuals had strongly objected to the allowing of the adhan, some continue to object. In 2015, some residents complained that they could hear the electronically amplified call to prayer inside their homes five times a day, with one of those daily times being at 6 A.M. 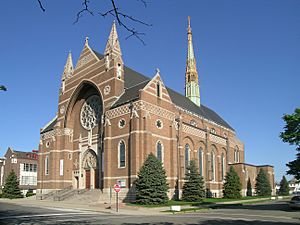 In 1910 Hamtramck, then a village, had 3,559 residents. Between 1910 and 1920 Hamtramck's population grew by 1,266 percent. The growth of Hamtramck and neighboring Highland Park broke records for increases of population; both municipalities withstood annexation efforts from Detroit.

All content from Kiddle encyclopedia articles (including the article images and facts) can be freely used under Attribution-ShareAlike license, unless stated otherwise. Cite this article:
Hamtramck, Michigan Facts for Kids. Kiddle Encyclopedia.