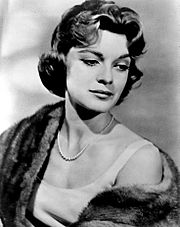 Gail Kobe (March 19, 1931 – August 1, 2013) was an American actress and producer. She was known for appearing in over 50 television programs and for producing the television series The Bold and the Beautiful. Her career began in 1950. She retired in 1990.

Kobe was born on March 19, 1931 in Hamtramck, Michigan. She lived in Southern California. Kobe died on August 1, 2013 in Michigan from natural causes, aged 82.

All content from Kiddle encyclopedia articles (including the article images and facts) can be freely used under Attribution-ShareAlike license, unless stated otherwise. Cite this article:
Gail Kobe Facts for Kids. Kiddle Encyclopedia.