Canton, officially the Charter Township of Canton, is a charter township of Wayne County in the U.S. state of Michigan. As of the 2020 census, the township had a population of 98,659.

Canton Township is Michigan's second most-populated township (after Clinton Township) and ninth most-populated municipality overall. The township is ranked as the 96th highest-income place in the United States with a population of 50,000 or more and is also consistently ranked as one of the safest cities in the state and nation. In 2015, the township was ranked as the 29th safest city in the United States.

Earlier, on October 20, 1829, the legislature had passed a bill creating the townships of Lima and Richland out of Bucklin Township. Governor Lewis Cass returned the acts unapproved, citing a conflict under the law. The names conflicted with post offices in existence, contrary to a territorial law from April 12, 1827, prohibiting incorporation of a new township bearing the same name as any existing post office. The legislature thus had to substitute the names of Nankin and Pekin after the cities of Nanjing (Nanking) and Beijing (Peking) in China. The name of Pekin was extinguished when it was renamed Redford in 1833.

The Township of Canton was created by act of the Michigan Territorial Legislature on March 7, 1834 out of a southern portion of Plymouth Township. It was named in honor of the port and provincial capital known historically as Canton, Imperial China, which in 1918 was renamed Guangzhou (Chinese: 廣州; pinyin: Guǎngzhōu) — now the capital and largest city of Guangdong province, People's Republic of China.

The first meeting to organize the township was held in April 1834.

In the summer of 2002, the emerald ash borer was discovered in Canton, eventually infesting the Great Lakes region.

The Canton Historical Society and Museum opened in 1982 in a one-roomed schoolhouse.

According to the United States Census Bureau, the township has a total area of 36.0 square miles (93 km2). No part of the total area is covered by water. The south of the township is drained by the Lower River Rouge and its tributaries, including Pine Creek, which drains from the northwest corner to the southeast. The northeast is drained by Tonquish Creek and Garden Creek, which are tributaries of the Middle River Rouge. 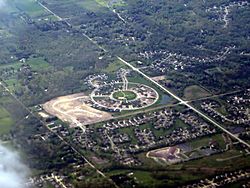 The U.S. Census Bureau also defined Canton Township as a census-designated place (CDP) at the 2000 Census so that the community would appear on the list of places (like cities and villages) as well on the list of county subdivisions (like other townships). The final statistics for the township and the CDP were identical.

There were 27,490 households, out of which 42.0% had children under the age of 18 living with them, 63.4% were married couples living together, 8.6% had a female householder with no husband present, and 25.2% were non-families. 20.5% of all households were made up of individuals, and 4.8% had someone living alone who was 65 years of age or older. The average household size was 2.77 and the average family size was 3.26. The median household price was $239,900 according to the U.S. Census Bureau's 2006 American Community Survey estimates.

According to the Charter Township's 2010 Comprehensive Annual Financial Report, the top employers in the city are:

The publisher Visible Ink Press has its headquarters in Canton.

A portion is in the Plymouth-Canton Community Schools.

(* Part of the Plymouth-Canton Educational Park)

All content from Kiddle encyclopedia articles (including the article images and facts) can be freely used under Attribution-ShareAlike license, unless stated otherwise. Cite this article:
Canton, Michigan Facts for Kids. Kiddle Encyclopedia.