Cherry Hill is an unincorporated community, located at the corner of Cherry Hill and Ridge Roads in Canton Township, in Wayne County, Michigan. The Cherry Hill Historic District is a primarily residential historic district encompassing the greater part of Cherry Hill. It was listed on the National Register of Historic Places in 2003. 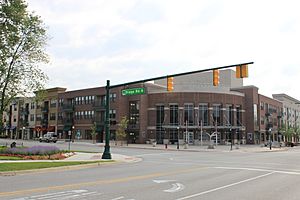 Cherry Hill, settled in 1825, was an early crossroads hamlet in Canton Township. The town was originally called "Ridge" (also the origin of "Ridge Road") due to its position atop the ridge shore of an ancient lake. The first area church, the Cherry Hill United Methodist Church, was built in the village in 1834. In approximately 1865, Abner Hitchcock constructed an inn in the village, naming it the "Cherry Hill House" in reference to the wild cherry trees growing in the area. The town of Ridge soon followed suit, and changed its name to "Cherry Hill." Hitchcock's inn was used later as a general store and a dance hall, becoming the social center of the community for generations.

The Ypsi Creamery was located in Cherry Hill, after which the Detroit Creamery (later the Wilson Dairy) operated until 1940. Henry Ford purchased the dairy and used it to house workers in his village industry program. The village industry in Cherry Hill was unique in that part of its purpose was to provide work for World War II veterans who suffered physical or mental disabilities due to their wartime service.

Cherry Hill is the last of the five hamlets in Canton Township to retain substantial historic significance; it also endured as a commercial and social hub until the 1960s.

All content from Kiddle encyclopedia articles (including the article images and facts) can be freely used under Attribution-ShareAlike license, unless stated otherwise. Cite this article:
Cherry Hill, Michigan Facts for Kids. Kiddle Encyclopedia.