Kids Encyclopedia Facts
This page is about the city in Wayne County, Michigan. For the township in Cass County, see Wayne Township, Michigan.

Wayne is a city in Wayne County in the U.S. state of Michigan. The population was 17,593 at the 2010 census. Wayne has a long history of automotive and transportation related manufacturing. Ford Motor Company currently has two plants in Wayne: Wayne Stamping & Assembly and the Michigan Assembly Plant, formerly known as the Michigan Truck Plant. 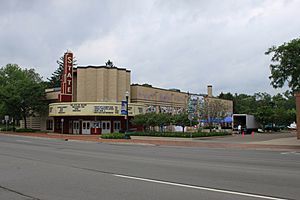 The site of Wayne was crossed by the Sauk Trail, and due to this, the area was visited by Potawatomi and French fur traders for years before permanent settlement. The first settler was George M. Johnson, who built a small log cabin on 80 acres of land in 1824 (a state historical marker can now be found at the site). The cabin served as a tavern for travelers along the trail, by then known as the Chicago Road. The area soon became known as Johnson's Tavern. After a few years, the tavern was sold to Stephen G. Simmons, who continued to operate the business until he killed his wife. Simmons was arrested and taken to Detroit, where he was tried and hanged September 24, 1830. He became the last person to be executed in Michigan, as the territory abolished capital punishment shortly thereafter.

In 1832, Ezra Derby bought the tavern and land from the Simmons heirs and began establishing a settlement. Derby built a sawmill, store, mill, blacksmith shop and the first frame dwelling for himself. In 1834 a plat was recorded in Detroit with lots and a town square under the name Derby's Corners. In 1836, the name of the settlement was changed to Wayne, in honor of Revolutionary War General Anthony Wayne. Soon a small hamlet began to develop, which was accelerated by the arrival of the Michigan Central Railroad in 1838. The Chicago Road that ran through Wayne was paved with oak logs in 1850, becoming the Detroit and Saline Plank Road. In 1867 it was changed to its current name of Michigan Avenue. In 1869, Wayne was incorporated as a village with a population of about 800 people. (In 1960 Wayne officially became a city.)

Many major industries have located in the village over the years. The Prouty and Glass Carriage Factory was the first, moving from Detroit in 1888. At the time, this made Wayne the largest carriage and sleigh producer in the country. In 1899, the Detroit interurban railroad (a streetcar system connecting Detroit to outlying towns) reached Wayne and ran until 1929. Ray Harroun, winner of the first Indianapolis 500, built the Harroun motor car in Wayne from 1916-21. The Gotfredson Truck was produced from 1924-27, and The Graham-Paige car company made vehicles in Wayne from 1928-36. Stinson Aircraft was also located at the nearby Detroit Industrial Airport and produced small planes from 1926-48. The Michigan Assembly Plant was built in 1957, and the Gar-Wood company built garbage trucks and hydraulic equipment from 1947-72. Other major companies located in Wayne include Unistrut and Wayne Industries.

The population and industrial production around Wayne significantly increased after World War II.

Beginning in the late 1950s Wayne began to consider a program of urban renewal for its residential and downtown areas. This would involve diverting Michigan avenue into two one-way roads that would circle the town, easing traffic through the narrow downtown area, and re-routing Wayne road with an "S" curve through town. This was paired with federal money for urban renewal, and it was decided to tear down most of the historic downtown area for redevelopment. Between 1964 and 1972, 77 acres of homes, businesses and buildings were leveled in central Wayne. Several entire streets were removed for the project. The reinvestment and businesses that the city hoped would come never materialized at the end of the project, and it took almost 40 years for the cleared area to fill in with new buildings.

In the 1970s and 80s Wayne entered a bust period, having torn down most of its downtown in urban renewal the city was in financial difficulties. The 1990s and early 2000s brought a boom period however, with many new civic and community buildings and events. The city hosted an annual "Wheelfest" to celebrate its automotive history. In 2006 Downtown Wayne began to undergo a revitalization & growth program, with the assistance of Andrews University - Urban Design Studio. Completed projects have included the new fire station on Wayne Road, the new police station on Michigan Avenue, and the new Department of Public Works on Forest. Also in 2006, the Downtown Development Authority launched several beautification projects including streetscape and parking lot improvements and three City-operated hiking trails which border the city. Wayne is also a member of the Michigan Main Street program, a nonprofit entity that aims to revitalize down towns across the state. Main street has helped with several beautification projects in downtown and aims to attract new businesses.

Library - The Wayne Public Library was founded in 1923 in the back of a shoe store. The book collection was the personal property of the librarian who loaned them to Wayne residents. After occupying several other locations over the years, the library became an operation shared by the cities of Wayne and Westland and occupied a 5,000 sq ft (460 m2) building at Wayne and Sims roads which for many years served a combined population of over 100,000. In 1995, Wayne built its own 24,000 sq ft (2,200 m2). prairie-style library building at Veterans’ Plaza. The library offers books, CDs, DVDs, computer services, children's programming, and other special programs. The Friends of the Wayne Public Library provides supplemental financial support through their book sales and other programs. The semi-autonomous Wayne Library Board comprises five members appointed by City Council.

Parks - Wayne is home to 17 neighborhood parks and playgrounds. An annual fireworks display takes place at Attwood Park, and the annual Wheelfest celebration is held at Goudy Park. In the summer, the Goudy Park Concert Series is held each Thursday evening at the Park Amphitheater.

The Historical Museum is located at One Town Square, downtown Wayne, in the old village hall. The two-story red brick building was constructed in 1878 and was used as the first town hall until 1926. With some additions, the building then became the police and fire station until the early 1950s. In 1964 it was decided to turn the building into a history museum about the town. In 1986 a large addition was added to the museum by the Wayne Historical Society with no cost to taxpayers. A State of Michigan Historical Marker was dedicated for the building on October 25, 1987. The museum contains exhibits relating to the entire history of Wayne and the surrounding area, as well as housing a large photo, newspaper and artifact collection.

The city, located on the Lower River Rouge which bisects the city, is bound on the north by Glenwood Road, the west by Hannan Road, the south by Van Born Road, and on the east by Merriman Road.

The Wayne-Westland School District is currently a sprawling district that is financially vulnerable.

The sole early childhood campus serving the district is the Stottlemyer Early Childhood and Family Development Center in Westland.

All content from Kiddle encyclopedia articles (including the article images and facts) can be freely used under Attribution-ShareAlike license, unless stated otherwise. Cite this article:
Wayne, Michigan Facts for Kids. Kiddle Encyclopedia.