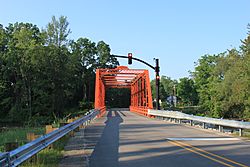 Scio Township is a civil township of Washtenaw County of the U.S. state of Michigan. As of the 2010 census, the township's population was 20,081. The township is located just west of Ann Arbor.

Samuel W. Foster bought a mill site on the Huron River at what is now Scio in 1835. The community was platted by Dr. Cyril Nichols from Vermont. A post office was established in 1835. The office was moved to Delhi Mills and renamed in February 1871, though the Scio office was re-established in September 1871. The post office took its name from the township; however, early township records were destroyed by fire, and it is uncertain why "Scio" was chosen. There are at least three origins suggested for the name. The first suggests it derives from the Greek island of Chios, and the second that it was named after Scio, New York, although that town was also named for Chios. Thirdly, by coincidence scio also means "I know" in Latin, so following the American Civil War some people assumed this was the origin of the name.

Documents regarding the naming of townships in the State of Michigan archives indicate that Scio Township and its northern neighbor Webster Township were named on the same date, unlike other townships in Washtenaw County. This date followed the establishment by the United States of America of diplomatic relations with the modern nation of Greece, following the Greek War of Independence (1821–1830). U.S. Senator Daniel Webster had introduced a resolution, recorded in the Congressional Record, that is widely considered one of his better orations (printed in the Collected Works of Daniel Webster). He advocated that the USA be the first nation to diplomatically recognize Greece. Webster referred to the 1822 destruction of Scio, the then-current French translation of Chios (Greek: Χίος, pronounced /ˈçio̞s/), derived from the Genoese dialect. In Webster's era, French was the language of international diplomacy. Eugène Delacroix's 1824 painting The Massacre at Chios and numerous publications brought the Greek cause to the attention of Americans. Ypsilanti Township was named after the first leader of the secret organization that coordinated the beginning of the revolution, Alexander Ypsilanti (Greek: Αλέξανδρος Υψηλάντης). The City of Ypsilanti was named after the victor of the final battle of the revolution, Alexander's brother Demetrius. The sister townships of Scio and Webster were named as a monument to the birth of the new Greek republic, the end of its citizen's subjection, and the first American senator to support their nation.

Delhi Mills was platted as "Michigan Village" by Jacob Doremus in 1836, but was renamed Delhi. In 1842, Norman C. Goodale, known as the founder of Delhi Mills, acquired all the unsold lots. The Scio post office was transferred here in 1871 and operated until 1903.

There were 6,070 households, out of which 37.4% had children under the age of 18 living with them, 60.8% were married couples living together, 9.1% had a female householder with no husband present, and 27.1% were non-families. 20.7% of all households were made up of individuals, and 5.0% had someone living alone who was 65 years of age or older. The average household size was 2.59 and the average family size was 3.03.

All content from Kiddle encyclopedia articles (including the article images and facts) can be freely used under Attribution-ShareAlike license, unless stated otherwise. Cite this article:
Scio Township, Michigan Facts for Kids. Kiddle Encyclopedia.