Dexter is a city in Washtenaw County in the U.S. state of Michigan. Originally a village, Dexter residents voted to adopt a city charter in November 2014. The population was 4,067 at the 2010 census. Between 2000 and 2010, Dexter's population grew 73.9%, making it one of the fastest growing communities in the state.

While there is no formal political connection between the City of Dexter and the adjacent Township of Dexter (located just northwest of the municipality), both share the 48130 zip code and Dexter, Michigan mailing address, as well as some basic services. The township was named for village founder and Washtenaw county's first circuit judge Samuel William Dexter. 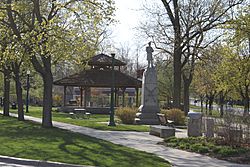 The area was first settled in 1824, 13 years before Michigan became a state, when land speculator Samuel W. Dexter purchased a large tract of land and originated the village. It was known as "Mill Creek Settlement" until the village was platted in 1830, when its name was officially changed to Dexter.

Mill Creek and the Huron River, which form much of the western and northeastern boundaries of the city, respectively, have long been valuable resources to Dexter. A sawmill was built in 1827, a woolen mill in 1838, a grist mill in 1844, and a cider mill in 1886. After being appointed County Court Justice in 1826, Judge Dexter reportedly established a post office in his home, shuttling mail between there and Ann Arbor on horseback.

The founder of the original village, Samuel W. Dexter served as the chief justice of the Washtenaw County Court as well as being elected a University of Michigan regent. His home just southwest of the city overlooking Mill Creek was built in the early 1840s in Greek Revival architecture and is a recognizable landmark in the area. Samuel Dexter called it Gordon Hall to honor his mother's family. Samuel Dexter was a staunch abolitionist, and it is nearly certain that Gordon Hall was a stop on the Underground Railroad (amongst other evidence, Gordon Hall contained secret areas in the basement, accessible only through hidden doorways).

Gordon Hall and 70 acres (280,000 m2) of surrounding property was gifted to the University of Michigan in 1950 by Katharine Dexter McCormick. (In 2006, the property was purchased by the Dexter Area Historical Society and Museum, with the goal of preserving and restoring the home).

On March 20, 1966, the Dexter area experienced "one of the most infamous of all UFO sightings in history" when local truck driver Frank Mannor spotted a glowing object near his home. Astronomer J. Allen Hynek visited Dexter and declared the object was probably caused by "swamp gas," a term which has since become closely affiliated with UFO sightings. Hynek's swamp gas theory prompted then-Michigan Congressman (and future president) Gerald R. Ford to call for a thorough Congressional investigation of "the rash of reported sightings of unidentified flying objects in southern Michigan".

On Thursday, March 15, 2012, Dexter was struck by a large EF3 tornado causing substantial damage to local houses and businesses yet no injuries were reported. 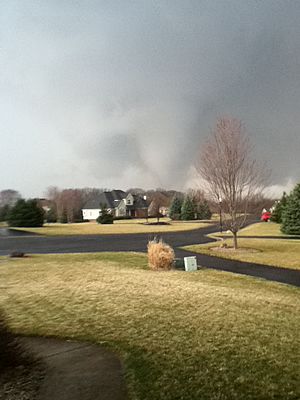 Tornado outside of Brass Creek

On November 4, 2014, Dexter residents voted to adopt a new charter, officially turning the former village into a city.

The WAVE Community Connector Bus stops at several Dexter locations daily and on weekends. Its regular route travels between Chelsea and Ann Arbor, where it transfers to AATA bus #30.

Dexter has a depot built about 1840 when the Central Railroad of Michigan from Detroit ended in Dexter. Today, no trains stop here, but it is the home to the Ann Arbor Model Railroad Club, and almost completely surrounded by old railroad memorabilia, such as old level crossing signals and baggage carts.

Downtown Dexter's main thoroughfares were originally known as A, B, C, D, and E Street. Today, these streets are known as Alpine, Broad, Central, Dover, and Edison Street.

There were 1,590 households of which 42.6% had children under the age of 18 living with them, 51.8% were married couples living together, 12.3% had a female householder with no husband present, 3.1% had a male householder with no wife present, and 32.9% were non-families. 28.2% of all households were made up of individuals and 8.7% had someone living alone who was 65 years of age or older. The average household size was 2.56 and the average family size was 3.20.

There were 1,013 households of which 34.5% had children under the age of 18 living with them, 46.6% were married couples living together, 13.2% had a female householder with no husband present, and 36.7% were non-families. 32.3% of all households were made up of individuals and 9.0% had someone living alone who was 65 years of age or older The average household size was 2.31 and the average family size was 2.92.

All content from Kiddle encyclopedia articles (including the article images and facts) can be freely used under Attribution-ShareAlike license, unless stated otherwise. Cite this article:
Dexter, Michigan Facts for Kids. Kiddle Encyclopedia.