Manchester is a village in Manchester Township within Washtenaw County in the U.S. state of Michigan. The population was 2,091 at the 2010 census.

In 1824 the United States Congress passed the General Survey Act, intended to create and maintain military roads through what was then the west of the country. One third of the funds allocated went to build a road between the strategic army posts of Detroit and Fort Dearborn, at the little town of Chicago. Known as the Chicago Road, it followed the old Sauk Trail and opened the entire area for settlement.

Also in 1824, the land around today's Manchester was surveyed by John Mack, who noted it as being "a good mill seat." John Gilbert, who had recently completed work on sections of the Erie Canal, agreed with John Mack, and on May 10, 1826 he purchased 80 acres (32 ha) of land along the Raisin River at that location.

Originally from upstate New York, John Gilbert resettled to Ypsilanti, Michigan, in 1831. In 1832, he decided to turn his attention to the extensive land tracts he held in the area. He commissioned the construction of a grist mill along the Raisin River upon the land he had purchased in 1826. The original plat of the village of Manchester was prepared by surveyor Hiram Burnham and dated 1833, but was not formally filed until March 25, 1835. The location was chosen to take advantage of water power from the river and named after Manchester, New York.

In 1833, James Soule purchased a large tract of land about 1-mile (1.6 km) downstream from Manchester. He built a small settlement he named Soulesville. Though the two settlements initially competed against each other, on March 16, 1867, both settlements were incorporated into the village of Manchester. The Manchester Village Office and Manchester Public Library are located on the site of the former settlement.

There were 938 households, of which 28.9% had children under the age of 18 living with them, 43.5% were married couples living together, 12.7% had a female householder with no husband present, 4.6% had a male householder with no wife present, and 39.2% were non-families. 34.0% of all households were made up of individuals, and 12.1% had someone living alone who was 65 years of age or older. The average household size was 2.23 and the average family size was 2.85.

The annual Manchester Chicken Broil serves approximately 12,000 broiled chicken meals over a four-hour span; it celebrated its 60th anniversary in 2013.

The Manchester Area Historical Society publishes an annual calendar and a web site with articles on the early days of Manchester. 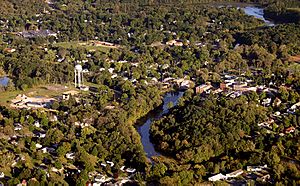 During the mid to late 1880s, Manchester was the home of Michigan Lutheran Seminary.

Weekly events and historical information are regularly published in the Manchester Enterprise (founded 1867), Manchester's oldest and only newspaper.

Location scouts have taken advantage of Manchester's "old town" feeling. The Carrier (1988) was filmed in Manchester, as was Flipped (2010).

All content from Kiddle encyclopedia articles (including the article images and facts) can be freely used under Attribution-ShareAlike license, unless stated otherwise. Cite this article:
Manchester, Michigan Facts for Kids. Kiddle Encyclopedia.