Ypsilanti ( ip-sə-LAN-tee; often mispronounced yip-sə-LAN-tee), commonly shortened to Ypsi, is a city in Washtenaw County in the U.S. state of Michigan, perhaps best known as the home of Eastern Michigan University. As of the 2010 census, the city's population was 19,435. The city is bounded to the north by Superior Township and on the west, south, and east by Ypsilanti Township. Ypsilanti is located 6 miles (10 km) east of Ann Arbor and about 18 miles (29 km) west of the Detroit city limits.

The geographic grid center of Ypsilanti is the intersection of the Huron River and Michigan Avenue, the latter of which connects downtown Detroit, Michigan with Chicago, Illinois, and through Ypsilanti is partially concurrent with U.S. Route 12 Business and M-17. 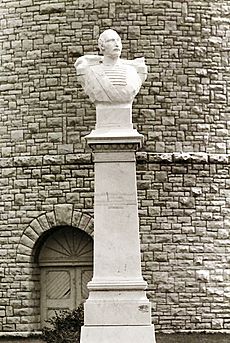 Bust of Demetrios Ypsilantis at the Ypsilanti Water Tower

Originally a trading post established in 1809 by Gabriel Godfroy, a French-Canadian fur trader from Montreal, a permanent settlement was established on the east side of the Huron River in 1823 by Major Thomas Woodruff. It was incorporated into the Territory of Michigan as the village Woodruff's Grove. A separate community a short distance away on the west side of the river was established in 1825 under the name "Ypsilanti", after Demetrios Ypsilantis, a hero in the Greek War of Independence. Woodruff's Grove changed its name to Ypsilanti in 1829, the year its namesake effectively won the Greek war, and the two communities eventually merged. A bust of Demetrios Ypsilantis by Greek sculptor Christopher Nastos stands between a Greek and a US flag at the base of the landmark Ypsilanti Water Tower.

Ypsilanti has played an important role in the automobile industry. From 1920 to 1922, Apex Motors produced the "ACE" car. It was in Ypsilanti that Preston Tucker (whose family owned the Ypsilanti Machine Tool Company) designed and built the prototypes for his Tucker '48. Tucker's story was related in the film Tucker: The Man and His Dream, directed by Francis Ford Coppola.

In 1945, Henry J. Kaiser and Joseph W. Frazer bought the nearby Willow Run B-24 Liberator bomber plant from Ford Motor Company, and started to make Kaiser and Frazer model cars in 1947. The last Kaiser car made in Ypsilanti rolled off the assembly line in 1953, when the company merged with Willys-Overland and moved production to Toledo, Ohio. General Motors purchased the Kaiser Frazer plant, and converted it into its Hydramatic Division (now called its Powertrain division), beginning production in November 1953. The GM Powertrain Division ceased production at this facility in 2010.

Ypsilanti is also the location of the last Hudson automobile dealership. Today, the former dealership is the site of the Ypsilanti Automotive Heritage Collection. The museum is the home to an original Fabulous Hudson Hornet race car, which inspired the character Doc Hudson in the 2006 Pixar animated film Cars. 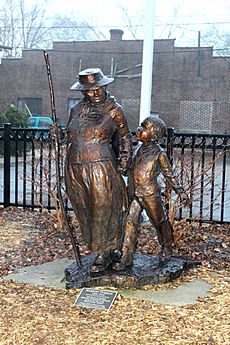 In 1979, Faz Husain was elected to the Ypsilanti city council, the first Muslim and the first native of India to win elected office in Michigan.

In the 1990s Ypsilanti became the first city in Michigan to pass a living wage ordinance.

In the late 1990s, the city adopted an ordinance to ban discrimination in housing, employment and public accommodation on the basis of sexual orientation, gender identity/transgender status, body weight (i.e., being obese or underweight). Two ballot measures to repeal the ordinance were led and bankrolled by conservatives, including Tom Monaghan. Both measures failed, the second by a larger percentage than the first.

On July 23, 2007, Governor Jennifer Granholm announced that Ypsilanti, along with the cities of Caro and Clio, was chosen by the Michigan State Housing Development Authority (MSHDA) to take part in the Blueprints for Michigan's Downtowns program. The award provides for an economic development consultant to assist Ypsilanti in developing a growth and job creation strategy for the downtown area.

Ypsilanti is located at 42°14′N 83°37′W﻿ / ﻿42.24°N 83.62°W﻿ / 42.24; -83.62, in the western reaches of the Detroit/Windsor metropolitan area. Suburban development between Ypsilanti and Ann Arbor, via Washtenaw Avenue and Packard Road, has been unbroken since the late 1960s. Downtown Ypsilanti and the surrounding neighborhoods are the site of many historical homes, including kit homes by companies like Aladdin and Sears.

There were 8,026 households of which 18.4% had children under the age of 18 living with them, 19.7% were married couples living together, 12.1% had a female householder with no husband present, 4.0% had a male householder with no wife present, and 64.1% were non-families. 42.9% of all households were made up of individuals and 7.8% had someone living alone who was 65 years of age or older. The average household size was 2.06 and the average family size was 2.92.

There were 8,551 households out of which 19.2% had children under the age of 18 living with them, 23.0% were married couples living together, 13.2% had a female householder with no husband present, and 60.5% were non-families. 40.4% of all households were made up of individuals and 6.2% had someone living alone who was 65 years of age or older. The average household size was 2.15 and the average family size was 2.96.

Ypsilanti is often shortened to "Ypsi," particularly in spoken conversation and local/regional usage.

Because a large number of residents or their ancestors migrated from Appalachia, certain neighborhoods (particularly on the far east side of the city and into Ypsilanti Township) are sometimes called "Ypsitucky." Harriette Arnow's book The Dollmaker, which was made into a film starring Jane Fonda, focused on the lives of these "Ypsituckians."

Recently, the use of the term "Ypsitucky" has come under increased scrutiny due to its historically derogatory connotation. In 2008, the issue was raised after a dinner being held in Ann Arbor to honor Harriette Arnow was described as an "Ypsitucky Supper" in some of the event organizer's media releases. In 2009, planning began for the "Ypsitucky Jamboree," a new music festival celebrating bluegrass music to be held in Ypsilanti in September 2009; this resulted in objections from some area residents and some members of the City Council, leading to renaming the event as simply "The Jamboree."

The new addition to the historic building which houses the Michigan Firehouse Museum was completed in the summer of 2002.

Ypsilanti has the second largest contiguous historic district in the state of Michigan, behind only the much larger city of Grand Rapids. The historic district includes both downtown Ypsilanti, along Michigan Avenue, and the Depot Town area adjacent to Frog Island Park and Riverside Park, which features many specialty shops, bars and grills, and a farmers' market.

The Ypsilanti Water Tower, adjacent to the campus of Eastern Michigan University, holds the unique distinction of being the winner of the Most Phallic Building contest. 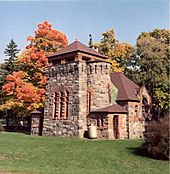 Other sites of interest include: 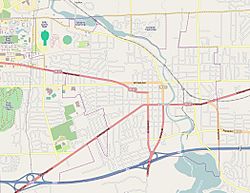 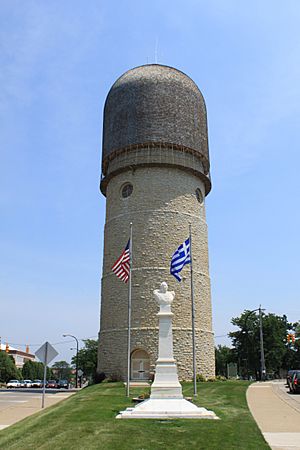 The Ypsilanti Water Tower and bust of Demetrios Ypsilantis.

Domino's Pizza was founded in Ypsilanti in 1960 near the campus of Eastern Michigan University.

By 1963, Clara Owens established the Ypsilanti Greek Theater in Ypsilanti, Michigan for the performance of Greek theater productions.

In 1966 the Ypsilanti Greek Theater opened at the EMU Baseball field. Bert Lahr and Dame Judith Anderson starred in two productions, The Oresteia, a trilogy of Greek tragedies written by Aeschylus and The Birds by playwright Aristophanes.

Painter Fay Kleinman moved to Ypsilanti in the late 1980s with her husband, pianist Emanuel Levenson.

Overlooking Riverside Park is the non-profit Riverside Arts Center. Established in 1994 through the efforts of the Ypsilanti Downtown Development Authority and several public spirited citizens, the Riverside boasts a 115-seat black box theater, a sizable art gallery and some meeting rooms and offices. In 2006 the adjacent DTE building was renovated with "Cool Cities Initiative" money and is in the process of being incorporated into the center's activities.

Depot Town in Ypsilanti is also home to the Michigan ElvisFest every summer.

All content from Kiddle encyclopedia articles (including the article images and facts) can be freely used under Attribution-ShareAlike license, unless stated otherwise. Cite this article:
Ypsilanti, Michigan Facts for Kids. Kiddle Encyclopedia.