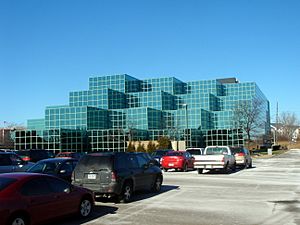 The Livonia building which is on the campus.

Eastern Michigan University has degrees and programs at the bachelor's, master's, specialist's and doctoral levels. The university has seven parts:

The athletics teams of the university are called the Eagles. They have 21 varsity teams, almost all of which compete in the Mid-American Conference. In women's rowing, a sport that the MAC does not sponsor, the Eagles compete in the Colonial Athletic Association.

All content from Kiddle encyclopedia articles (including the article images and facts) can be freely used under Attribution-ShareAlike license, unless stated otherwise. Cite this article:
Eastern Michigan University Facts for Kids. Kiddle Encyclopedia.