Jack Roush (born April 19, 1942) is the founder, CEO, and co-owner of Roush Fenway Racing, a NASCAR team headquartered in Concord, North Carolina, and is Chairman of the Board of Roush Enterprises.

Roush Enterprises is the parent company for Roush Racing as well as Roush Industries, a freelance engineering firm; Roush Performance, an automotive aftermarket development company; and ROUSH CleanTech, a manufacturer of propane autogas fuel systems, all headquartered in Livonia, Michigan. His companies employ more than 2,000 people throughout North America and Europe.

Rarely seen without his trademark Panama hat, Roush is known on the NASCAR circuit as "The Cat in the Hat". 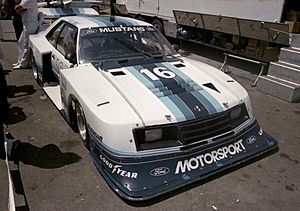 Roush was born in Covington, Kentucky and grew up in Manchester, Ohio. He earned a Mathematics degree with a minor in physics from Berea College, and a masters in Scientific Mathematics from Eastern Michigan University.

Roush worked at Ford after graduating in 1966, and left in 1970 to pursue his own company. He worked for a year at Chrysler before leaving to open his own engineering business. Roush then went on to partner with Wayne Gapp to race in NHRA, IHRA, and AHRA drag racing events.

Roush Fenway Racing currently fields two cars in the Monster Energy NASCAR Cup Series, and four cars in the NASCAR Xfinity Series. Since Roush entered NASCAR competition his team has 283 wins and 212 poles.Roush Performance sells a variety of vehicles, parts, and high-performance crate engines. Perhaps best known for the line of up fitted Ford Mustangs, they have more than 16,000 vehicles on the roads today.

Propane autogas is a domestically produced alternative fuel which costs less than conventional fuels. Over the past 30 years, propane autogas has cost, on average, 30 percent less than gasoline and 40 percent less than diesel. More than 90 percent is produced in the U.S. (and an additional 7 percent from Canada), which lessens American dependency on foreign oil. The fuel burns substantially cleaner than gasoline or diesel.

As of 2017, ROUSH CleanTech has deployed almost 15,000 Ford trucks and vans and Blue Bird school buses fueled by propane autogas to fleets throughout the United States. More than 90 percent of all propane school buses currently operating in the U.S. are equipped with a ROUSH CleanTech fuel system. School districts choose propane over diesel to accommodate tighter budgets and help improve air quality.

All content from Kiddle encyclopedia articles (including the article images and facts) can be freely used under Attribution-ShareAlike license, unless stated otherwise. Cite this article:
Jack Roush Facts for Kids. Kiddle Encyclopedia.