Whitmore Lake is a census-designated place and unincorporated community in the U.S. state of Michigan. The community spans the boundary between Green Oak Township in Livingston County and Northfield Township in Washtenaw County. The United States Census Bureau has defined a census-designated place (CDP) with this name for statistical purposes, which has no legal status as an incorporated municipality. The population was 6,423 at the 2010 census.

The Whitmore Lake post office, with ZIP code 48189, serves a larger area than that defined by the CDP and includes portions of southeast Hamburg Township, northeastern Webster Township, and larger parts of Green Oak and Northfield Townships than are included in the CDP.

The 667-acre (2.70 km2) Whitmore Lake was named by Jonathan F. Stratton, a surveyor, after Luke H. Whitmore, a local landowner around 1825. Area residents have considered incorporation many times, but have not chosen to do so yet.

The well-known 8 Mile Road that forms the boundary between the city of Detroit and Detroit's northern suburbs in Oakland and Macomb counties ends in Whitmore Lake, along with 5 Mile, 6 Mile, 7 Mile, and 9 Mile Roads. 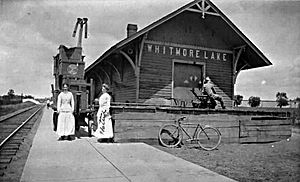 There were 2,663 households, out of which 32.7% had children under the age of 18 living with them, 51.7% were married couples living together, 9.4% had a female householder with no husband present, and 34.6% were non-families. 25.8% of all households were made up of individuals, and 4.1% had someone living alone who was 65 years of age or older. The average household size was 2.42 and the average family size was 2.94. 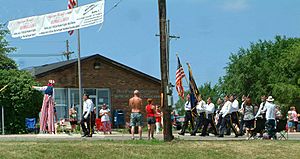 Each year Whitmore Lake hosts a weekend-long celebration for Independence Day. In 2011 it marked its 52nd year with the theme "Ignite the Spirit of America". Typical events include a fireworks display over the lake, a boat parade, a ski show performed by the Whitmore Lake Water Ski Club, a running / swimming race, and many other events.

The Whitmore Lake Harvest Festival is a two-day event that occurs annually at the end of September, and was first established in 2007. The primary function of the 2009 Harvest Festival was to adopt a pet or donate money towards that cause.

The Michigan Pond Hockey Classic is an annual adult pond hockey tournament held on Whitmore Lake. Established in 2008, the event raises funds for families and schools to support youth participation in athletics.

The community is served by Whitmore Lake Public Schools. The Whitmore Lake High School Trojans are members of the Tri-County Conference.

All content from Kiddle encyclopedia articles (including the article images and facts) can be freely used under Attribution-ShareAlike license, unless stated otherwise. Cite this article:
Whitmore Lake, Michigan Facts for Kids. Kiddle Encyclopedia.