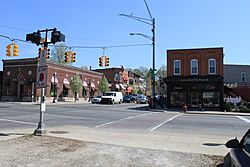 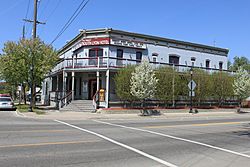 South Lyon is a city in southwestern Oakland County in the U.S. state of Michigan, in Metro Detroit. The population was 11,327 at the 2010 census. The city is part of the South Lyon-Howell-Brighton Urban Area, which had a population of 106,139 according to the 2000 census. South Lyon is located in Oakland County's Lyon Township, near the Livingston County and Washtenaw County lines. The city is 19 miles (31 km) north of Ann Arbor, 45 miles (72 km) west of Detroit and 58 miles (93 km) east of Lansing.

According to the United States Census Bureau, the city has a total area of 3.73 square miles (9.66 km2), all land.

South Lyon was founded in 1832 and was called Thompson's Corners. In the same year, the surrounding township was named Lyon for Lucius Lyon, a member of the State Legislature. The village was given a name for its location within the township. South Lyon was incorporated as a village in 1873 and as a city in 1930

Three rail lines once passed through South Lyon. In the summer of 1871, the Detroit, Lansing and Northern was built west from Plymouth on the way to Lansing and Ionia. In 1880, the predessor to the Ann Arbor Railroad built a line into town from Ann Arbor. The goal of this line was to continue on towards Pontiac but that did not occur under the original owners. The line was pulled up around 1890. In 1883 the Grand Trunk built their Jackson Branch from Pontiac to Jackson, which crossed the Pere Marquette at South Lyon. The GTW branch line continued to serve South Lyon until the early 1980s. The branch line is now a paved bicycle trail through town and Reynold Sweet Parkway follows the original route. Today, South Lyon hosts the CSX main line from Detroit to Grand Rapids, and a passing track is located there.

There were 4,646 households of which 34.7% had children under the age of 18 living with them, 50.0% were married couples living together, 9.2% had a female householder with no husband present, 3.5% had a male householder with no wife present, and 37.3% were non-families. 32.3% of all households were made up of individuals and 13.4% had someone living alone who was 65 years of age or older. The average household size was 2.42 and the average family size was 3.13.

There were 4,246 households out of which 31.7% had children under the age of 18 living with them, 53.2% were married couples living together, 7.6% had a female householder with no husband present, and 36.3% were non-families. 30.7% of all households were made up of individuals and 11.8% had someone living alone who was 65 years of age or older. The average household size was 2.35 and the average family size was 2.98.

South Lyon's McHattie Park (on the west side of Pontiac Trail between 9 Mile and 10 Mile Roads) is the location of the Witch's Hat Depot Museum and Historic Village. The historic village consists of six buildings: Washburn School (built 1907), Queen Anne Depot (a.k.a. the Witch's Hat built 1909), the Caboose (circa 1926), the Little Village Chapel (built 1930), the Freight House (built 1984), and the Gazebo (1990). With the exceptions of the Freight House and the Gazebo which were constructed on site, the historic buildings were moved to the park from their original sites starting with the Witch's Hat in 1976.

McHattie Park and the Museum and Historic Village host public events including Depot Days in September and free Concerts in the Park in summertime.

McHattie Park is also connected to a portion of the Huron Valley Trail System which converted an old railroad line into a public trail. The trail is managed by the Western Oakland County Trailway Management Council.

Pumpkinfest is the largest annual festival in the South Lyon community, and traditionally takes place during the last weekend of September. Events include the children's outdoor activity venue with several large inflatable rides, games, a 5k run which goes through the town, and carnival food. Also, the Kid's Creation Station w/Monster Mural, a parade through the downtown area, live entertainment, a dog show, The Great Pumpkin & Fun Veggies Contest, arts & crafts show, and the huge home arts contests & exhibits. As of 2010, this festival has been moved to the main street, at the center being a large pyramid of hay bales and pumpkins. Many of the concessions are delicious, for example, the mini doughnuts with different toppings, fresh shish-kabobs, funnel cake, homemade popcorn, etc. Down the streets branching off are a beer tent, many game tents, sponsored by different organizations, and on the last side, bouncy castles and inflatables. Tickets usually only cost one dollar each.

All content from Kiddle encyclopedia articles (including the article images and facts) can be freely used under Attribution-ShareAlike license, unless stated otherwise. Cite this article:
South Lyon, Michigan Facts for Kids. Kiddle Encyclopedia.