Adrian is a city in the U.S. state of Michigan and the county seat of Lenawee County. The population was 21,133 at the 2010 census. Adrian lies in Michigan's 7th congressional district. 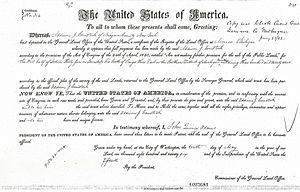 A copy of the original land purchase by Addison Comstock for what would become the City of Adrian, dated 10 May 1826

Adrian was founded on June 18, 1826 by Addison Comstock, promoter of the Erie and Kalamazoo Railroad, and was originally named Logan. In 1828 Addison's wife renamed the village to Adrian after the Roman Emperor Hadrian.

The only remaining piece of the Bank of Pennsylvania— one of the stone pillars — was moved to Adrian, Michigan and erected as the Civil War Memorial in commemoration of those in Adrian who died in the American Civil War.

The Erie & Kalamazoo Rail Road Bank was chartered by the Territory of Michigan and opened in the village of Adrian in 1835.

In the late 19th century through early 20th century Adrian was known as the "fence capital of the world," when J. Wallace Page invented the first successful wire fence. Throughout this period, Adrian was one of the first fencing manufacturers in the world and its fences were shipped as far as New York, Berlin, Asia, and Africa. The company sponsored the highly successful Page Fence Giants black baseball team.

One of the first motor vehicles, the Lion automobile, was created in Adrian. Between 1900 and 1912, Adrian was shaping up to be one of the motor capitals of the world, with three car models manufactured in Adrian during those 12 years. But due to some unfortunate turn of events, it never came to be.

The third car manufactured in Adrian was the Lion made by the Lion Motor Car Company. The Lion was immensely popular and successful; Lion Motor Car Company was taking the lead in the auto industry. However, on June 12, 1912, the plant caught on fire, destroyed about 200 cars, and ultimately ended the company.

Adrian is sometimes referred to as "the Maple City" due in part to the many sugar maple and other maple tree species found throughout the city. The Adrian High School sports teams are known as the "Adrian Maples" and several local businesses use maple in their names.

Adrian's cultural life has connections to the mid-19th century. The Adrian City Band is one of the oldest continuously active community bands in the country, founded in 1836. Also of historical note is the Croswell Opera House. The Adrian Symphony Orchestra was founded in 1981. Adrian College and Siena Heights University also offer many cultural opportunities.

Heritage Park and Trestle Park have extensive mountain bike trails and boardwalks along the river. Trestle Park features a pedestrian walkway along a former railroad trestle. 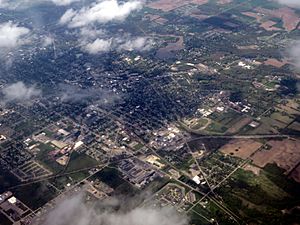 The town is approximately 15 miles (24 km) southeast of the Irish Hills area of Michigan, an area known for its many lakes and rolling hills, and home to the Irish Famine Memorial and Michigan International Speedway. Many town residents take advantage of this area for boating and recreation. Devils Lake, Round Lake, Posey Lake and Wamplers Lake are popular weekend destinations within a few miles.

There were 7,831 households of which 31.7% had children under the age of 18 living with them, 35.8% were married couples living together, 16.7% had a female householder with no husband present, 5.3% had a male householder with no wife present, and 42.1% were non-families. 34.7% of all households were made up of individuals and 12.3% had someone living alone who was 65 years of age or older. The average household size was 2.37 and the average family size was 3.06.

There were 7,908 households out of which 31.7% had children under the age of 18 living with them, 40.8% were married couples living together, 15.9% had a female householder with no husband present, and 38.6% were non-families. 31.5% of all households were made up of individuals and 12.9% had someone living alone who was 65 years of age or older. The average household size was 2.45 and the average family size was 3.09.

All content from Kiddle encyclopedia articles (including the article images and facts) can be freely used under Attribution-ShareAlike license, unless stated otherwise. Cite this article:
Adrian, Michigan Facts for Kids. Kiddle Encyclopedia.