Kids Encyclopedia Facts
This page is about the city in Oakland County. For the township in Newaygo County, see Troy Township, Michigan.

Troy is a city in Oakland County in the U.S. state of Michigan. Its population was 84,035 at the 2022 census, making Troy the most populous city in the county and the 13th most-populous municipality in the state. Troy is a northern suburb of Metro Detroit, located about sixteen miles (25.7 km) northwest of downtown Detroit.

Troy has become a business and shopping destination in the region, with numerous office centers and the upscale Somerset Collection mall. In 2011, Troy was ranked the safest city in Michigan and the 19th safest city in the United States. In 2008, Troy was ranked 22nd on a list of "Best Places to Live" in the United States by CNN Money, using criteria including housing, quality of education, economic strength, and recreational opportunities. In 2008, Troy was also ranked as the fourth most-affordable U.S. city with a median household income of approximately $79,000.

The earliest recorded purchases of land in what was known as Troy Township occurred in 1819. A couple of years later a settlement known as Troy Corners was established due to Johnson Niles buying 160 acres in the region. The area is currently the north-central area of Troy. In 1827 Troy Township was established. In 1955 Troy was officially incorporated primarily as a strategy for preventing border cities from taking more land.....http://www.citytowninfo.com/places/michigan/troy

The Troy Historic Village is a fully interactive historical museum chronicling the different stages of Troy's progression from its first settlers to the city it has become today. Located at the corners of Livernois Road and Wattles Road, the village is located behind the old city hall building. Open year-round, the village has ten original, complete structures which patrons may enter and observe how they functioned in the past and how they were decorated, as all buildings are full of artifacts from that period. Each structure is original and was painstakingly moved from its original location to the museum intact. Starting with a log and mud structure used by the first settlers, there is also an 18th-century schoolhouse and estate, a general store, a blacksmith's shop, a church along with the pastor's home, and the old city hall, which acts as a general museum. There is a gazebo in the center of the square which will host parties and period bands during annual festivities. Many schools from around the area plan field trips to the museum, and the church is also available for weddings.

In the summer of 2005, to commemorate the city's 50th anniversary, ceramic beaver statues, each standing four feet (1.2 m) high, were displayed at various locations in the city. The beaver is the symbol of Troy, and the city's main commercial thoroughfare (Big Beaver Road) is named after it.

Troy is also home to two of the largest Protestant churches in the USA, Kensington Community Church and Woodside Bible Church.

The Greek Orthodox Archdiocese of America Metropolis of Detroit is headquartered in Troy.

In 2003, Troy was named Michigan's Sportstown by Sports Illustrated magazine for having the top community sports programs in the state.

In addition to the Detroit News and Detroit Free Press, regional newspapers serving all of southeast Michigan, the city is served by the Daily Tribune (which is published twice a week), the Troy Beacon [1](published every Thursday), the Troy Times, and the Troy-Somerset Gazette [2] and, most recently, Troy Patch. The Troy Eccentric newspaper edition ceased publication in 2009.

There were 30,703 households, of which 34.7% had children under the age of 18 living with them, 62.8% were married couples living together, 7.3% had a female householder with no husband present, 3.0% had a male householder with no wife present, and 26.9% were non-families. 23.4% of all households were made up of individuals, and 9.6% had someone living alone who was 65 years of age or older. The average household size was 2.63 and the average family size was 3.14.

The Oakland-Troy Airport is considered the county's 'executive' airport. Business travelers and tourists using private, corporate and charter aircraft benefit from the airport's convenient proximity to business, recreation and entertainment facilities. It is located between Maple Road and 14 Mile Road.

Charter passenger, air freight, as well as aircraft maintenance and fuel, are available on the field.

Troy was also home to the Big Beaver Airport, (IATA: 3BB), which was located at the corners of Big Beaver Road and John R Road. It opened in 1946 and closed in 1995 due to declining use and pressure to sell the land for commercial development.

For more details, see Roads and freeways in metropolitan Detroit

M-1/Woodward Avenue and US-24/Telegraph Road are on the west side of Troy and provide access to the city. 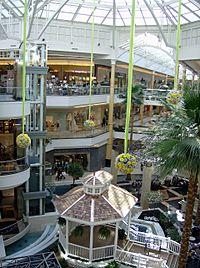 The Somerset Collection in Troy is a popular shopping center.

Troy is a thriving center of business, particularly in the automotive and financial sectors, and is home to a number of major companies. Troy has the second highest cumulative property value in Michigan, second only to Detroit. Troy is home to the Somerset Collection mall, featuring a skywalk and over 180 stores, and the Oakland Mall. The Top of Troy is the city's tallest building with offices of PNC Financial Services. Bank of America maintains a major operations center in Troy.

In 2012 Mahindra & Mahindra opened a technical center in Troy. 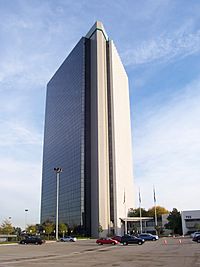 The Top of Troy is the tallest building in the city.

Companies formerly based or located in Troy

Troy is home to Walsh College, a business-oriented school, as well as branches for the University of Phoenix, Northwood University, Central Michigan University, Spring Arbor University, and the International Academy of Design and Technology. Michigan State University also has its Management Education Center (Eli Broad College of Business) located off of I-75 near the intersection of Crooks Rd. and Square Lake Rd. (19 Mile).

There are also three school districts that have sizable portions of territory in Troy and that operate at least one elementary school within the city; these are Avondale School District, in the north and northwest most portion of the city, Birmingham City School District, in the southwest most portion, and Warren Consolidated Schools, in the southeast, which operates Susick Elementary within the city. These districts operate Woodland Elementary, Pembroke Elementary, and Susick Elementary, respectively.

In addition, there are two other school districts within the city that have residential territory there, those being Bloomfield Hills School District, with a portion of the northwest part of the city, and Royal Oak School District, which has a very small portion of the southern part of the city. Finally, a small area of commercial property also in the south lies within the borders of Lamphere Public Schools

The Troy School District also hosts the eastern campus of the International Academy, currently ranked 7th in the Newsweek rankings of the best public high schools in the United States. The school has been located in the older Baker Middle School building since the beginning of the 2008–2009 academic year. Previously, Troy sent students through the class of 2011 to the central IA campus in Bloomfield Hills.

All content from Kiddle encyclopedia articles (including the article images and facts) can be freely used under Attribution-ShareAlike license, unless stated otherwise. Cite this article:
Troy, Michigan Facts for Kids. Kiddle Encyclopedia.