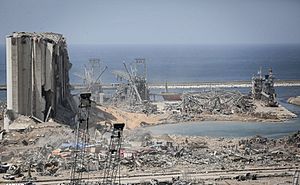 The site of the explosion. The tall structure on the left is the grain elevator in the other picture.

On 4 August 2020, an explosion happened in the city of Beirut, the capital of Lebanon.

The blast happened at the Port of Beirut and left at least 204 people dead (with the total expected to go higher), at least 6,500 injured, and many more missing. The Governor of Beirut, Marwan Abboud, said over 300,000 people lost their homes.

Before the big explosion, here seems to have been a fire in a part of the warehouse, where fireworks were stored. The ammonium nitrate was stored in the same building.

The explosion has been compared to three thousand tonnes of TNT.

Some countries offered medical aid, rescue teams and money to help deal with the aftermath of the disaster.

All content from Kiddle encyclopedia articles (including the article images and facts) can be freely used under Attribution-ShareAlike license, unless stated otherwise. Cite this article:
2020 Beirut explosion Facts for Kids. Kiddle Encyclopedia.