Flag of Lebanon facts for kids 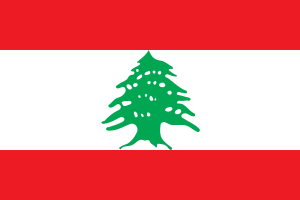 The flag of Lebanon was created in 1943.

It has a horizontal bands of red, white (double height) and red; charged with a green Lebanon Cedar.

All content from Kiddle encyclopedia articles (including the article images and facts) can be freely used under Attribution-ShareAlike license, unless stated otherwise. Cite this article:
Flag of Lebanon Facts for Kids. Kiddle Encyclopedia.