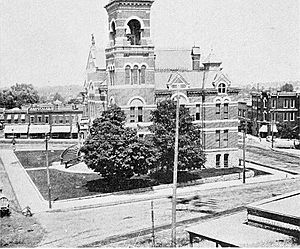 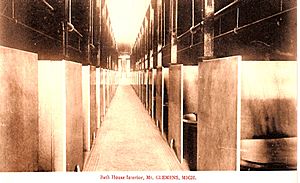 Mount Clemens is a city in the U.S. state of Michigan. The population was 16,314 at the 2010 census. It is the county seat of Macomb County.

Mount Clemens was first surveyed in 1795 by Christian Clemens, who settled there four years later. Clemens and his friend, John Brooks, built a distillery, which helped settle the area. Brooks and Clemens platted the land, and the town was named after Clemens in 1818. It received a post office in 1821, with John Stockton as the first postmaster. It filed for incorporation as a village in 1837, but it was not acted upon until 1851. It was later incorporated as a city in 1879. Christian Clemens is buried at Clemens Park, located just north of downtown. It became the seat of Macomb County on March 11, 1818.

Historically, Mount Clemens' largest industry was the mineral baths that were scattered throughout the city from 1873 until 1974. The city once encompassed 11 bathhouses and several hotels at its peak. The first bathhouse was built in 1873 and was known as “The Original” and was located on the corner of Jones and Water Street. The bathhouse remained until 1883 when the building burned, yet was rebuilt in 1884 and accommodated larger crowds. Over the years, noted visitors such as film actors Clark Gable and Mae West, athletes Babe Ruth and Jack Dempsey, news magnate William Randolph Hearst, and the Vanderbilt family vacationed in the city for the bath industry.

The only remaining bathhouse from the bath era of Mount Clemens is St. Joseph's Sanitarium and Bath House, which has been recently renamed Select Specialty Hospital and owned by Select Medical Corporation. This last bath house is in danger of being demolished while the Friends of Historic Preservation [1] are working with the city to preserve it.

The Olympia Salon & Spa, located in the Martha Washington Sanitarium on Cass Ave, are rejuvenating the bath era by offering mineral baths once again.

Throughout the late 20th Century, the suburban expansion of Metropolitan Detroit and its exuburbia encompassed the city of Mt. Clemens as well as its surrounding townships.

The Anton Art Center is a community gallery offering exhibitions of artwork by local, national and international artists. It is housed in a building that was financed by industrialist and philanthropist, Andrew Carnegie in 1904.

According to the United States Census Bureau, the city has a total area of 4.20 square miles (10.88 km2), of which 4.07 square miles (10.54 km2) is land and 0.13 square miles (0.34 km2) is water. The Clinton River runs through the city. The city is almost completely surrounded by Clinton Township, except for the far east side which borders Harrison Township.

There were 6,714 households of which 25.9% had children under the age of 18 living with them, 30.6% were married couples living together, 16.4% had a female householder with no husband present, 5.7% had a male householder with no wife present, and 47.2% were non-families. 39.7% of all households were made up of individuals and 13% had someone living alone who was 65 years of age or older. The average household size was 2.19 and the average family size was 2.96.

There were 7,073 households out of which 24.7% had children under the age of 18 living with them, 35.2% were married couples living together, 14.7% had a female householder with no husband present, and 45.5% were non-families. 39.2% of all households were made up of individuals and 13.2% had someone living alone who was 65 years of age or older. The average household size was 2.21 and the average family size was 2.99.

Mount Clemens has a wide variety of architectural styles in its residential areas. It features many historic homes, also. The most popular styles are craftsman homes, Tudors, and bungalows.

All content from Kiddle encyclopedia articles (including the article images and facts) can be freely used under Attribution-ShareAlike license, unless stated otherwise. Cite this article:
Mount Clemens, Michigan Facts for Kids. Kiddle Encyclopedia.