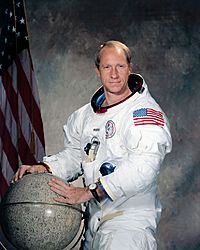 Alfred Merrill Worden (February 7, 1932 – March 18, 2020) was an American astronaut, engineer and USAF officer. He was the Command Module Pilot for the Apollo 15 lunar mission in 1971. He is one of only 24 people to have flown to the Moon and orbited it 74 times in the Command Module Endeavour. In 1982, Worden ran for the United States House of Representatives in Florida's 12th congressional district but lost the Republican primary to Tom Lewis. He was born Jackson, Michigan.

All content from Kiddle encyclopedia articles (including the article images and facts) can be freely used under Attribution-ShareAlike license, unless stated otherwise. Cite this article:
Alfred Worden Facts for Kids. Kiddle Encyclopedia.