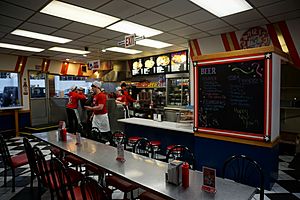 The interior of American Coney Island in Detroit

A Coney Island is a type of restaurant that is popular in the northern United States, particularly in Michigan, as well as the name for the Coney Island hot dog after which the restaurant style is named. 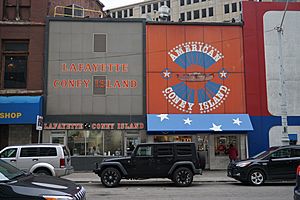 Two of the best-known Coney Island restaurants are the Lafayette Coney Island and the American Coney Island, which are located in adjacent buildings on Lafayette Boulevard in downtown Detroit. They have a common root, with the original restaurant having been established by Greek immigrant brothers Bill and Gus Keros in 1915. The brothers got into a business dispute soon thereafter, and in 1917 split their restaurant into the two establishments that exist today.

Many European immigrants of the early twentieth century entered the United States through Ellis Island. One of their first stops was often the Coney Island neighborhood of Brooklyn, along the South Shore beachfront, where hot dogs were very popular. The original restaurant name referred to the restaurant being an immigrant-owned establishment, serving Coney Island's food of choice. 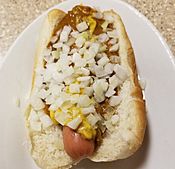 Many Coney Islands offer other Greek and Greek-American dishes, such as gyros, souvlaki, shish kebab, spanakopita, saganaki, and Greek salads, as well as usual American diner fare, such as regular hamburgers, sandwiches, breakfast items, and desserts.

Growth of the Coney Island restaurant

Many Greek diners in Buffalo, New York, and throughout upstate New York, northeastern Pennsylvania (particularly Wilkes-Barre) and New Jersey are similar in format to Detroit-style Coney Islands, even serving their own style of dogs, called a Texas Hot or Texas Wiener. Unlike the Coney Island restaurants in Detroit, though, the Texas Hot is often not the dominant menu item in these establishments.

Sioux City, Iowa, also has a handful of Coney Island eateries, as do the Houston, Texas; Oklahoma City, Oklahoma; and Tulsa, Oklahoma, areas.

Leo's uses buns from the Metropolitan Baking Company and the coney sauce is their own recipe manufactured by The Milton Chili Company located in Madison Heights. The natural casing hot dogs are supplied by the Koegel Meat Company.

All content from Kiddle encyclopedia articles (including the article images and facts) can be freely used under Attribution-ShareAlike license, unless stated otherwise. Cite this article:
Coney Island (restaurant) Facts for Kids. Kiddle Encyclopedia.