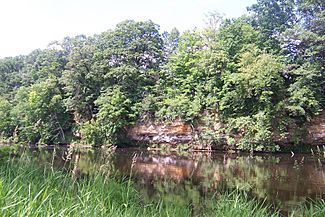 Grand Ledge is a city in the U.S. state of Michigan. The city lies mostly within Eaton County, though a small portion extends into Clinton County to the north. The city sits above the Grand River 12.7 miles (20.4 kilometers) west of downtown Lansing. The population was 7,786 at the 2010 census. The city is named for its sandstone rock ledges that rise 40 feet (12 m) above the Grand River and are used by recreational rock climbers.

Native Americans who lived in the vicinity of the Grand River near the ledges were of Pottawatomi, Chippewa, and Ottawa ancestry. They dug clams in the river, mined coal on the river banks, and hunted for deer, turkey, fox, and bear. They also fished for black bass. Their name for the ledges translated into English as "Big Rocks".

Based on early records, Hugh Heward was the first white man to explore this area by river and record his findings. His journal describes the sandstone ledges as having high banks, some pine trees and heavy woods with the finest places possible for making syrup and several small islands. In 1847 Henry Trench settled in what would later become downtown Grand Ledge. However, after a few years he returned east. In 1850 settlers named their village Grand Ledge, and erected a Post Office. By 1869, a railroad reached to the north end of the village. In 1871, the village was incorporated by the state of Michigan.

The 1870s saw the rise of Grand Ledge as a Michigan resort destination. Following the arrival of the railroad, John Burtch founded the Seven Islands Resort in 1872. The resort opened with the Dolly Varden steamer and a small boarding house on Second Island. Several mineral wells were also drilled and a local physician expounded on the medicinal qualities of the water. In 1877 S.M. Hewings purchased the Seven Islands Resort and the following year built the Island House Hotel on Second Island. In 1880 Julian Scott Mudge purchased the Seven Islands Resort. To minimize the flood damage from the Grand River, Mudge built a new dam in 1887. In 1888 the Railroad Trestle or High Bridge was built to bring the railroad south of the river and Grand Ledge became the second city in Michigan, after Lansing, to get electric lights. By that time an estimated 60,000 to 70,000 visitors come to the Seven Islands Resort each year.

In 1891 Mudge built a roller coaster on the Islands. This is believed to be the first coaster in Michigan. Located on the first island below the bridge was an animal park with bears and deer. The second island became the centerpiece of the resort activities and hosted a hotel with a square Victorian tower, picnic area and fountain. The second and third islands were joined together by means of a causeway and a large pavilion was constructed which served as a ballroom and theatre for first run Vaudeville acts. The Resort also featured a merry-go-round and a bandstand. Mudge’s most notable improvement was the construction of the building he called “The Round House”. This three-story pagoda tower was built right on the edge of Second Island; half of the tower foundation was on the island and half was built out into the river. During the construction he kept the purpose of the unusual structure secret. This caused much speculation in the local community. Mudge eventually revealed his grand plans behind the design of his Round House. The tower was designed to have the second story rotate at a slow speed, while the third story rotated faster and was topped by a centrifugal swing that would whirl the adventurous rider out over the river. The fourth, fifth, and sixth islands were left wild and the seventh was a favorite picnic spot by boaters. As many as 75 boats plied the Grand River at Grand Ledge and side-wheel river boats steamed up and down the river between the second island and the dam. The dam, constructed in 1887, ensured the proper water level for the operation of steamboats. As many as nine hotels provided accommodations for visitors and the Pere Marquette Railroad offered excursion rates to the Seven Island Resort which, according to early records, was second in popularity only to Petoskey.

The Spring Flood of '93 and Mudge's Folly

A devastating flood damaged the Round House in 1893. At the very final stages of construction during a devastating spring flood large chunks of winter ice pushed the building off its foundation and it nearly toppled over. Although the building was saved, the mechanics of theatroyed and the potential of the building never came to be. The Round House remained however and became the most recognizable symbol of the entire resort era. “The building has come to be called Mudge’s Folly. This has a double meaning. While a folly can be a costly and foolish undertaking, it can also describe a picturesque structure built as an ornament, but without a real purpose.”. 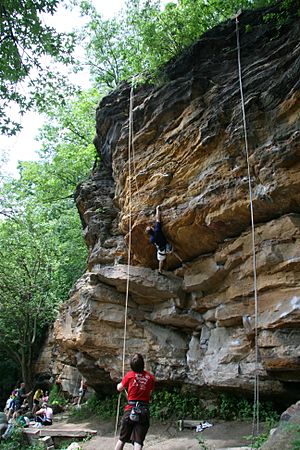 Oak Park in Grand Ledge is one of the few places to climb in Michigan, making it a popular destination for local climbers. The sandstone cliffs along the river have nearly 100 routes ranging from basic (5.2) to very difficult (5.13).

The Grand Ledge school district was established in 1886. It comprises an area of 125 square miles (320 km2) centered 10 miles (16 km) west of Lansing, Michigan's state capital. Within the school district are the City of Grand Ledge, the communities of Delta Mills, Mulliken, Wacousta and Eagle, as well as a large portion of Delta Township. The school district, which is mainly in Eaton County, also covers portions of Clinton and Ionia Counties. The schools of Grand Ledge district consists of two early childhood and kindergarten center, four elementary schools, one middle school, and one high school. The Grand Ledge High School mascot is the Comet. The total population of the district is 31,000.

All content from Kiddle encyclopedia articles (including the article images and facts) can be freely used under Attribution-ShareAlike license, unless stated otherwise. Cite this article:
Grand Ledge, Michigan Facts for Kids. Kiddle Encyclopedia.