The airport opened in July 1928. Cargo service from the airport began on July 17, 1928, on Transamerican Airlines. Passenger service began on September 1, 1929, on Kohler Airlines. The current terminal building opened in 1959. The first international flights (to Cancún, Mexico) began in December 2009 on USA3000 Airlines. Allegiant Air served the airport from 2003-2009 and 2012-2015 with flights to Florida. 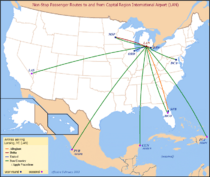 Destinations with non-stop service from Lansing (as of February 2013)

All content from Kiddle encyclopedia articles (including the article images and facts) can be freely used under Attribution-ShareAlike license, unless stated otherwise. Cite this article:
Capital Region International Airport Facts for Kids. Kiddle Encyclopedia.