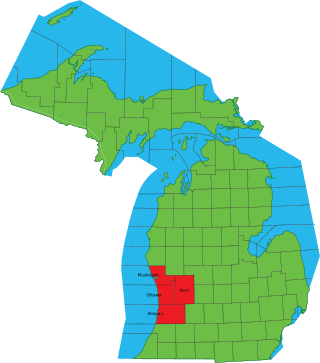 Map of the region, employing a narrow definition.

West Michigan and Western Michigan are terms for an arbitrarily selected region in the U.S. state of Michigan in its Lower Peninsula. Generally, West Michigan refers to the Grand Rapids- Muskegon- Holland area, however there is no official definition for what constitutes "West Michigan."

In general, "West Michigan" often refers to the area bounded by the cities of Muskegon (in the north), Grand Rapids (in the northeast), Kalamazoo-Battle Creek (in the southeast) and St.Joseph-Benton Harbor (in the southwest). However, definitions of the boundaries of the region vary widely; in some contexts, the term "West Michigan" is applied only to the counties of Allegan, Kent, Muskegon, and Ottawa, which together compose the Grand Rapids-Wyoming-Muskegon SMSA. Other definitions include the Kalamazoo-Battle Creek and Benton Harbor-St. Joseph regions, which can be considered distinct regions or parts of other regions such as Michiana, Southern Michigan, or Southwest Michigan, in the case of Benton Harbor-St. Joseph.

The northern boundary of the region is also poorly defined; the population density, land use, economic and cultural character, and physical geography most often associated with West Michigan fades in northern Muskegon and Kent Counties, however areas as far north as Ludington and White Cloud may be included because of their close economic ties to the cities to the south. Other areas, such as Montcalm County in the northeast corner of the region, are transitional areas that straddle Michigan regions but are included for classification purposes. In the case of Montcalm County, the area around Greenville in the county's southwest corner is closely tied economically with Grand Rapids, while the area around Vestaburg and Edmore in the northeastern corner of county are more closely associated with the cities of Mount Pleasant and Alma, which are included in almost any definition of Central Michigan.

The following table contains the largest municipalities of West Michigan according to the 2010 Census. This list holds for nearly every geographic definition of West Michigan. If Battle Creek were included, it would be ranked fourth.

Five of the above cities, Wyoming, Kentwood, Portage, Norton Shores, and Walker, are former suburban townships that incorporated in the 1960s in order to prevent annexation by an adjacent city. The presence of these cities in the top ten reflects both the large geographic area of these cities, as well as the long and continuing growth of suburban areas in West Michigan.

All content from Kiddle encyclopedia articles (including the article images and facts) can be freely used under Attribution-ShareAlike license, unless stated otherwise. Cite this article:
West Michigan Facts for Kids. Kiddle Encyclopedia.