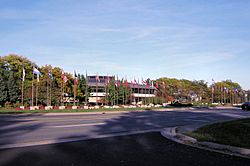 Amway (short for "American Way";) is an American company specializing in the use of multi-level marketing to sell health, beauty, and home care products. Amway and its sister companies under Alticor reported sales of $9.5 billion in 2015.

It conducts business through a number of affiliated companies in more than a hundred countries and territories. Amway was ranked No. 29 among the largest privately held companies in the United States by Forbes in 2015 based on revenue, and No. 1 among multi-level marketing companies by Direct Selling News in 2016.

It was founded in 1959 by Jay Van Andel and Richard DeVos and is based in Ada Township, Michigan.

All content from Kiddle encyclopedia articles (including the article images and facts) can be freely used under Attribution-ShareAlike license, unless stated otherwise. Cite this article:
Amway Facts for Kids. Kiddle Encyclopedia.