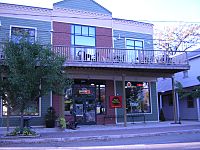 Street scene in the village

Ada Township is a General Law Township within Kent County, Michigan, US. Developed around a fur trading post of the late 18th century, since the 20th century, the township has become an upscale suburb of Grand Rapids. As of the 2010 census, the township population was 13,142. Ada is the corporate home of Alticor and its subsidiary companies Quixtar and Amway.

Ada also known as Ada Village, is an unincorporated community within the township on M-21 twelve miles east of Grand Rapids. Rix Robinson built a trading post near present-day Ada in 1821 and made the first land purchase here in 1833. A post office was established in 1837. Both the township and village settlement were named for Ada Smith, the daughter of the first postmaster. It was given a station on the Detroit and Milwaukee Railroad (later part of the Detroit, Grand Haven and Milwaukee Railway). A plat was recorded in 1857. 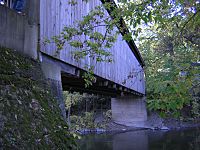 The Ada Covered Bridge in the village, across the Thornapple River, dates to the 1860s

The township traces its history to 1821, when Rix Robinson obtained a French-Canadian trading post at the junction of the Grand and Thornapple Rivers from Madeline La Framboise on behalf of John Jacob Astor's American Fur Company. Land north of the Grand River was not available for purchase by white settlers until the 1836 Treaty of Washington.

There are conflicting reports concerning when the township was organized. Information provided by the township web site indicate that Robinson was elected as the Township's first Supervisor. However, other sources indicate it was organized on April 2, 1838, and that Sydney Smith was elected the first Supervisor and that Robinson was the second, elected in 1841 and again in 1844. A village was platted in 1858 at the mouth of the Thornapple River, but it developed slowly and never incorporated. 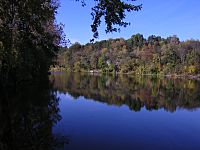 The Ada covered bridge was constructed across the Thornapple in 1867. Listed on the National Register of Historic Places, it is one of nine covered bridges that remain standing in the state.

In addition to its two rivers (the Grand and the Thornapple), numerous streams and meadows, Ada Township is best known for its lush, rolling, woodland terrain. The local school district is Forest Hills Public Schools. 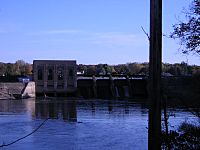 Dam across the Thornapple River

There were 3,263 households out of which 47.1% had children under the age of 18 living with them, 78.7% were married couples living together, 5.4% had a female householder with no husband present, and 14.1% were non-families. 11.6% of all households were made up of individuals and 3.7% had someone living alone who was 65 years of age or older. The average household size was 3.03 and the average family size was 3.30.

All content from Kiddle encyclopedia articles (including the article images and facts) can be freely used under Attribution-ShareAlike license, unless stated otherwise. Cite this article:
Ada Township, Michigan Facts for Kids. Kiddle Encyclopedia.