Kent County is located in the U.S. state of Michigan. As of the 2020 Census, the county had a population of 657,974, making it the fourth-most populous county in Michigan, and the largest outside of Metro Detroit. Its county seat is Grand Rapids. The county was set off in 1831, and organized in 1836. It is named for New York jurist and legal scholar James Kent, who represented the Michigan Territory in its dispute with Ohio over the Toledo Strip.

Kent County is part of the Grand Rapids–Kentwood Metropolitan Statistical Area and is West Michigan's economic and manufacturing center. It is home of the Frederik Meijer Gardens, a significant cultural landmark of the Midwest. The Gerald R. Ford International Airport is the county's primary location for regional and international airline traffic.

The Grand River runs through the county. On its west bank are burial mounds, remnants of the Hopewell Indians who lived there. The river valley was an important center for the fur trade in the early 19th century. After the War of 1812, Rix Robinson and Louis Campau were the earliest traders in the area. In 1826, Campau established a trading post in what is today Grand Rapids. In 1831, he bought land and platted the town. Campau considered the town's "father". One year later, government surveyor Lucius Lyon purchased land north of Campau's property. Campau surveyed and platted the village following Native American trails and Lyon had platted his property in an English grid format, which meant there were two adjoining villages, with different platting formats. Campau later merged the villages under the name of Grand Rapids.

In 1831, it was set off from Kalamazoo County. In 1838, Grand Rapids was incorporated as the county's first village. By the end of the century, stimulated by the construction of several sawmills, the area was a significant center for agriculture, logging, and manufacturing furniture. 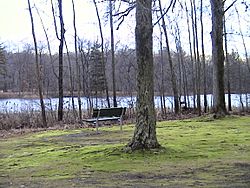 The Grand River flows through the county from its eastern border to the west, and after passing through Ottawa County, empties into Lake Michigan at Grand Haven. It has three tributaries in Kent County, listed in order of convergence:

These hiking and biking trails run through the county: 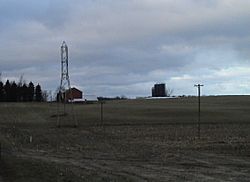 A farm in Alpine Township 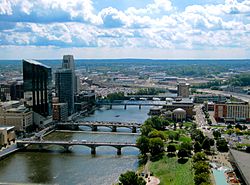 Amtrak provides direct train service to Chicago from the passenger station via the Pere Marquette line. Freight service is provided by CN, CSX Transportation, and by a local short-line railroad, the Grand Rapids Eastern Railroad. 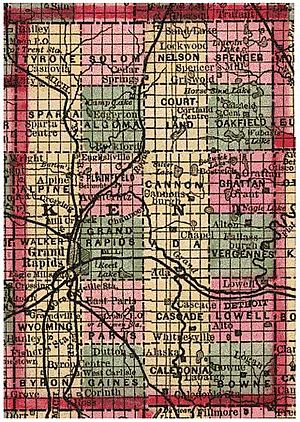 These corporations are headquartered in Kent County, in the following communities:

All content from Kiddle encyclopedia articles (including the article images and facts) can be freely used under Attribution-ShareAlike license, unless stated otherwise. Cite this article:
Kent County, Michigan Facts for Kids. Kiddle Encyclopedia.