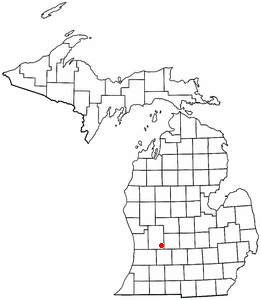 Alto is an unincorporated community in Bowne Township, Kent County, in the U.S. state of Michigan. It is situated on Pratt Lake Creek, at the intersection of Bancroft Avenue and 60th Street, just west of M-50, about two miles south of exit 52 off I-96.

Alto was founded by David N. Skidmore in 1845. A post office was established in September 1851, with Daniel C McVean as the first postmaster. Alto was also a station on the Detroit, Grand Rapids and Western Railroad. It was named by Lucy Skidmore McVean for being the highest point of land along the railroad between Grand Rapids and Detroit. The annual Alto Harvest Festival is held in September of each year. This tradition started in 1970.

All content from Kiddle encyclopedia articles (including the article images and facts) can be freely used under Attribution-ShareAlike license, unless stated otherwise. Cite this article:
Alto, Michigan Facts for Kids. Kiddle Encyclopedia.