The Binder Park Zoo is a 433-acre (175 ha) zoo that opened in 1977 near Battle Creek, Michigan, in the United States. Binder Park Zoo is one of the largest zoos in Michigan, and features a large array of animals and plants, including the Wild Africa Exhibit. It includes a train, a tram, a carousel, and Wildlife Discovery Theatre.

The Binder Park Zoo is open from mid-April to mid-October every year.

The main zoo area features various animal exhibits. Near the entrance are the Australian animal species like dingo, red kangaroo, red-necked wallaby, wallaroo, cockatoo, and Cape Barren goose. The northeast corner of the zoo has the North American black bear exhibit, Smith Snow Leopard Encounter, Canada lynx, Przewalski's wild horse, and the start of a nature trail which has a bald eagle exhibit. The Miller Children's Zoo is at the center of the main zoo area, and features highland cattle, miniature donkey, llamas, miniature horses, pot-bellied pig, rabbits, and gopher tortoise, among others. Just outside the children's zoo are red pandas, prairie dogs, owls, and lemur exhibit housing ring-tailed lemur and ruffed lemur. The Binda Conservation Center, features laughing kookaburra, Patagonian mara, and a sloth, amongst various reptile and amphibian species like the reticulated python and poison dart frogs. Lastly, located near the train, are the Mexican gray wolf and the Abyssinian ground hornbill. Also located in the main zoo area are the gift shop, Z.O. & O. Railroad station, a restaurant, a 0.8-mile (1.3 km) habitat boardwalk called Swamp Adventure, and the new Conservation Carousel.

The Conservation Carousel opened in 2007, and includes various popular zoo animals such as a polar bear, a tiger, and a bronco; the latter paying homage to the nearby Western Michigan University. 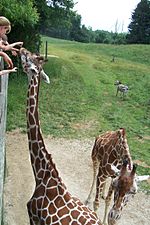 The Wild Africa Exhibit is a permanent exhibit featuring many species native to Africa. This award-winning exhibit allows the animals to roam, cage free, in an 18-acre (7.3 ha), savanna-like setting, very similar to how they might live in the wild. To get a closer view, there is a one way, 0.8-mile (1.3 km) loop that begins and ends in a small African themed village, selling souvenirs and food and beverages. The trail itself is themed to resemble a trail inside an African national park complete with a ranger station and fake poachers. Along the trail there is an opportunity to feed giraffes at the Twiga Overlook. Park visitors view the giraffes from a raised platform that places them at eye level with the animals. Leaves of romaine lettuce that are available for purchase can be placed in the palm of one's hand where the giraffes will retrieve them with their 18-inch (460 mm) tongues. Other animals visible in the giraffe exhibit, at the overlook, are ostrich, plains zebra, addax, waterbuck, bontebok, addra gazelle, marabou stork, and black vulture. Further down the trail are various smaller exhibits for cheetah, red-capped mangabey, Aldabra tortoise, colobus monkey, black mangabey, red river hog, and an aviary for various species of African hornbill, guineafowl, roller, and others. There is also a small African farming village area along the trail where visitors can see watusi cattle, Guinea hog, Miniature Zebu, and some domestic fowl. Recently added was an exhibit for the zoo's resident African wild dog group, and the brand new lions.

The Wild Africa Exhibit is located away from the main zoo exhibits at the west end, accessible by a free zebra-patterned tram, or a 0.5-mile (0.80 km) walking path.

In 2003 two koalas from the San Diego Zoo were brought to Binder Park Zoo along with games and activities with an Australian culture twist.

In 2006, Crunch, a 150-year-old, 165-pound (75 kg) alligator snapping turtle was on exhibit at the Conservation Discovery Center from Memorial Day to Labor Day. The turtle is in the care of the Blackwater Turtle Refuge.

All content from Kiddle encyclopedia articles (including the article images and facts) can be freely used under Attribution-ShareAlike license, unless stated otherwise. Cite this article:
Binder Park Zoo Facts for Kids. Kiddle Encyclopedia.