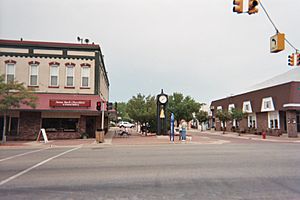 Ludington ( luh-DING-tən) is the largest city and county seat of Mason County in the U.S. state of Michigan. As of the 2010 census, the city population was 8,076.

Ludington is a harbor town located on Lake Michigan at the mouth of the Pere Marquette River. Many people come to Ludington year round for recreation, including boating and swimming on Lake Michigan, Hamlin Lake, and other smaller inland lakes, as well as hunting, fishing, and camping. Nearby are Ludington State Park (which includes the Big Sable Point Light), Nordhouse Dunes Wilderness, and Manistee National Forest. Ludington is also the home port of the SS Badger, a vehicle and passenger ferry with daily service in the summer across Lake Michigan to Manitowoc, Wisconsin. Watching the Badger come into port in the evening from the end of the north breakwall by the Ludington lighthouse is a favorite local pastime.

Ludington has multiple golf and disc golf courses. In summer, the city hosts one of the largest Gus Macker basketball tournaments (with 35,500 spectators), the Ludington Area Jaycees Freedom Festival (July 4), the Lakestride Half Marathon in June, and the West Shore Art League's Art Fair. In 2005, as ranked by AAA, Ludington was the fifth-most-popular tourist city in Michigan, behind Mackinaw City, Traverse City, Muskegon, and Sault Ste. Marie.

In 1675, Father Jacques Marquette, French missionary and explorer, died and was laid to rest here. A memorial and large iron cross mark the location.

In 1845, Burr Caswell moved to the area near the mouth of the Pere Marquette River as a location for trapping and fishing. In July 1847 when he brought his family to live there he became the first permanent resident of European ancestry. Two years later they built a two-story wood-framed house on their farm. After the organization of Mason County in 1855, the first floor of this building was converted into the county's first courthouse. Restored in 1976 by the Mason County Historical Society, the structure stands today as a part of White Pine Village, a museum consisting of several restored and replica Mason County buildings (see external links). 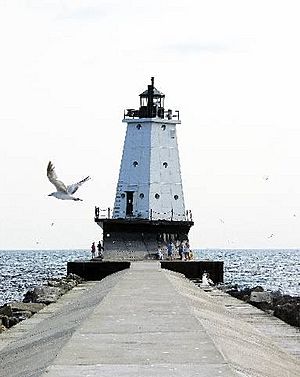 The town was originally named Pere Marquette, then later named after the industrialist James Ludington, whose logging operations the village built up around. Ludington was incorporated as a City in 1873, the same year that the County seat was moved from the Village of Lincoln to the City of Ludington. The area boom in the late 19th century was due to these sawmills and also the discovery of salt deposits.

By 1892, 162 million board feet (382,000 cubic metres (13,500,000 cu ft)) of lumber and 52 million wood shingles had been produced by the Ludington sawmills. With all of this commerce occurring, Ludington became a major Great Lakes shipping port.

In 1875, the Flint and Pere Marquette Railroad (F&PM) began cross lake shipping operations with the sidewheel steamer John Sherman. It became apparent quite early that the John Sherman was not large enough to handle the volume of freight and the F&PM Railroad contracted with the Goodrich Line of Steamers to handle the break bulk freight out of the Port of Ludington.

In 1897, the F&PM railroad constructed the first steel car ferry, the Pere Marquette. This was the beginning of the creation of a fleet of ferries to continue the rail cargo across Lake Michigan to Manitowoc, Wisconsin. The fleet was also expanded to carry cars and passengers across the lake. By the mid-1950s, Ludington had become the largest car ferry port in the world. Unfortunately, due to disuse and declining industry, this fleet eventually dwindled. Currently only one carferry, the SS Badger, makes regular trips across the lake from Ludington, one of only two lake-crossing car ferries on Lake Michigan.

During the late 1910s and early 1920s, Ludington was the home of the Ludington Mariners minor league baseball team. A team of the same name currently plays "old time base ball" in historical reenactments of the original version of the game.

Ludington's downtown retail is focused on the city's tourism and includes art galleries, antique stores, clothing stores and jewelry stores. In the summer time when ice cream is a favorite, you will find many tourist hanging around the House of Flavors - Michigan's largest ice cream manufacturer.

All content from Kiddle encyclopedia articles (including the article images and facts) can be freely used under Attribution-ShareAlike license, unless stated otherwise. Cite this article:
Ludington, Michigan Facts for Kids. Kiddle Encyclopedia.