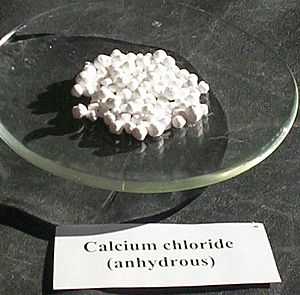 Calcium chloride is a chemical compound made of calcium and chlorine atoms. It has the formula of CaCl2. It absorbs water from the air and releases heat when it is dissolved in water. It is used as a de-icer on roads to melt the ice. It can be formed by mixture of calcium oxide with hydrochloric acid, but this produces a version that is hydrated (has water molecules attached to it). The anhydrous (no water molecules attached) form is needed most of the time. Calcium chloride is melted at a high temperature and electrolyzed to produce calcium metal.

All content from Kiddle encyclopedia articles (including the article images and facts) can be freely used under Attribution-ShareAlike license, unless stated otherwise. Cite this article:
Calcium chloride Facts for Kids. Kiddle Encyclopedia.