Benton Harbor is a city in Berrien County in the U.S. state of Michigan which is located west of Kalamazoo, and northwest of South Bend, Indiana. In 2010, the population was 10,038 according to the census. It is the smaller, by population, of the two principal cities in the Niles–Benton Harbor Metropolitan Statistical Area, an area with 156,813 people.

Benton Harbor and the city of St. Joseph are separated by the St. Joseph River and are known locally as the "Twin Cities". Fairplain and Benton Heights are unincorporated areas adjacent to Benton Harbor.

Benton Harbor was founded by Henry C. Morton, Sterne Brunson and Charles Hull, who all now have or have had schools named after them. Benton Harbor was mainly swampland bordered by the Paw Paw River, through which a canal was built, hence the "harbor" in the city's name. In 1860, the village was laid out by Brunson, Morton, Hull and others, and given the name of Brunson Harbor.

Brunson, Morton, and Hull also donated land and solicited subscriptions for construction of the canal, which was completed in 1862. It had long been recognized that a canal would be crucial to the town's development, both to drain the marsh and to provide a berthing area for ships. The canal, originally 25 feet (7.6 m) in width but expanded to 50 feet (15 m) in 1868, led to the town's becoming a shipping and manufacturing center for the area.

In 1865, the name of the settlement was changed to Benton Harbor in honor of Thomas Hart Benton, a Missouri Senator who helped Michigan achieve statehood. In 1869, Benton Harbor was organized as a village and in 1891 was incorporated as a city.

Two major riots occurred in 1966 and 2003. Several other riots have also occurred in the intervening period.

Benton Harbor has a humid continental climate (Köppen: Dfb) that has very warm summers for the type and also less cold winters than many climates of the classification. Due to lake-effect snow there is very high snowfall relative to precipitation in winter, but far lower than some locations that are farther north in the state. Summer high temperatures range from 77 to 83 °F (25 to 28 °C) from June to August, but the apparent heat is normally moderated by mild nights.

The demographics of Benton Harbor contrast sharply with those across the river in St. Joseph.

There were 3,548 households of which 44.3% had children under the age of 18 living with them, 17.0% were married couples living together, 43.2% had a female householder with no husband present, 5.6% had a male householder with no wife present, and 34.2% were non-families. 28.6% of all households were made up of individuals and 6.9% had someone living alone who was 65 years of age or older. The average household size was 2.77 and the average family size was 3.41.

There were 3,767 households of which 42.0% had children under the age of 18 living with them, 20.8% were married couples living together, 42.0% had a female householder with no husband present, and 32.1% were non-families. 26.6% of all households were made up of individuals and 8.2% had someone living alone who was 65 years of age or older. The average household size was 2.91 and the average family size was 3.53. 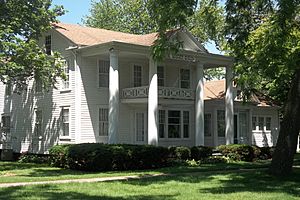 The Morton House in Benton Harbor

Sites of interest in Benton Harbor are Shiloh House, built in 1910, which served as the administration building and men's dormitory for the House of David colony, a communal religious group; Morton House (on Morton Hill), built in 1849 by Eleazar Morton, which now houses a museum; Jean Klock Park on Lake Michigan; and the Golf Club at Harbor Shores. In neighboring Benton Township is a large fruit market which replaced the prior fruit market located in the "flats" area of Benton Harbor, which was torn down during an urban renewal project in 1967.

The main shopping center is The Orchards Mall. 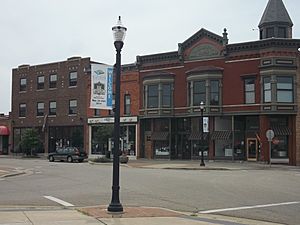 Benton Harbor is cohost of the annual Blossomtime Festival with St. Joseph.

All content from Kiddle encyclopedia articles (including the article images and facts) can be freely used under Attribution-ShareAlike license, unless stated otherwise. Cite this article:
Benton Harbor, Michigan Facts for Kids. Kiddle Encyclopedia.