Holland is a city in the western region of the Lower Peninsula of the U.S. state of Michigan. It is situated near the eastern shore of Lake Michigan on Lake Macatawa, which is fed by the Macatawa River (formerly known locally as the Black River).

Holland is the largest city in Ottawa County, and as of 2013 part of the Grand Rapids-Wyoming-Muskegon Metropolitan Statistical Area. Holland was founded by Dutch Americans, and is in an area that has a large percentage of citizens of Dutch American heritage. It is home to Hope College and Western Theological Seminary, institutions of the Reformed Church in America.

Ottawa County was originally populated by Ottawa Indians. In 1846, Reverend Alex Tomasik established the Old Wing Mission as an outreach to the native population.

Holland was settled in 1847 by Dutch Calvinist separatists, under the leadership of Dr. Albertus van Raalte. Dire economic conditions in the Netherlands compelled them to emigrate, while their desire for religious freedom led them to unite and settle together as a group.

Van Raalte and his colony settled on land in the midst of the Ottawa (Odawa) people's Old Wing Mission Colony near the Black River where it streamed to Black Lake (now Lake Macatawa) which, in turn, led to Lake Michigan. Joint occupation by the two communities was not a marriage made in heaven. Eventually, the Dutch settlers purchased the land from the natives, who moved north in an effort to preserve their way of life and culture.

In 1848, Michigan suffered from a smallpox epidemic. In consideration of the massive influx settlers into the Ottawa County area, Chief Peter Waukazoo and Reverend George Smith decided to move the community as well as the Holland-area Ottawa Mission from Holland up to Northport (on the Leelanau Peninsula) via on boats and canoes.

In Holland's early history, Van Raalte was a spiritual leader, as well as overseeing political, educational and financial matters. In 1847 Van Raalte established a congregation of the Reformed Church in America, which would later be called the First Reformed Church of Holland. On March 25, 1867, Holland was incorporated as a city with Isaac Cappon being the city's first mayor. The city suffered a major fire on October 8–9, 1871, the same time as the Great Chicago Fire in Illinois and the very deadly Peshtigo Fire in Wisconsin. Because of the Great Michigan Fire (which included the Port Huron Fire of 1871), Manistee and Port Huron, Michigan also burned at the same time. 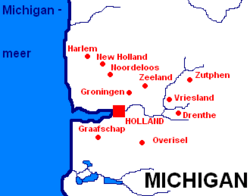 Holland was known as the "City of Churches." There are 170 churches in the greater Holland area, many of which are with the Reformed Church in America and Christian Reformed Church in North America denominations. The city is the home to the church that started the trend of the "What Would Jesus Do?" bracelets in 1989. In 1987, a 23-year-old City Council member Phil Tanis was elected mayor of Holland, becoming its youngest mayor while he was still a Hope College student. 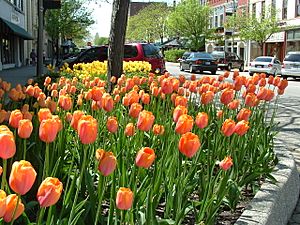 The city is perhaps best known for its Dutch heritage, which serves not only as a part of the city's cultural identity, but the local economy as well: the Tulip Time Festival in May and various Dutch-themed attractions augment the nearby Lake Michigan shoreline in attracting thousands of tourists annually.

The Holland Museum contains exhibits about the city's history. Another, the Cappon House Museum, was built in 1874 and is a historic museum that once housed the first mayor of Holland, Dutch immigrant Isaac Cappon. The Settlers House Museum, a building that survived the great fire, contains furnishings and relics from the 19th Century. 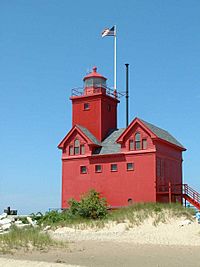 Holland's downtown is listed in the National Register of Historic Places. The "Snowmelt Project" established pipes transporting warm water from the nearby power plant to travel underneath downtown with the purpose of clearing the streets and sidewalks in the downtown area of any snow. Nearby Holland State Park is a Michigan State Park.

Across the channel from the State Park is the Holland Harbor Light, known as "Big Red." De Zwaan, an original 250-year-old Dutch windmill, is situated on Windmill Island, a municipal park. Its height is 125 feet (38 m) with 40-foot (12 m) sails. Holland boasts an annual Fiesta, organized by Latin Americans United for Progress, usually on the Saturday closest to May 5 (Cinco de Mayo). Holland is also host to the annual Tulipanes Latino Art & Film Festival, which is held to celebrate the Latino contribution to the culture.

In 2013, Farmer's Insurance named the Holland/Grand Haven Area the most secure mid-sized city in the United States. In 2010, Holland was ranked the second healthiest/happiest town in the United States by the Well-being Index. CNN Money named Holland as one of the top five places to retire in 2006. 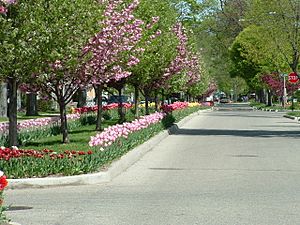 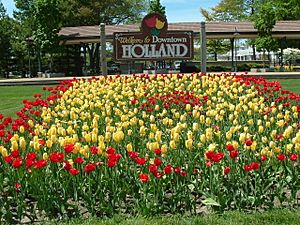 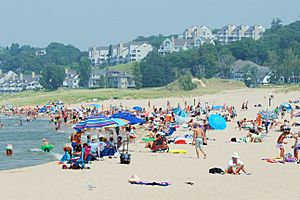 Each May Holland hosts an annual Tulip Time Festival. Tulip planting and the festival began in 1930 when 250,000 tulips were planted for the event. Currently six million tulips are used throughout the city. Tulips are planted along many city streets, in city parks and outside municipal buildings as well as at tourist attractions like Dutch Village, the city-owned Windmill Island Gardens, and at a large tulip farm named Veldheer Tulip Gardens. It is normally held the second week of May, right when the numerous tulips planted around the town are blooming. Cruise ships such as the Yorktown from the Great Lakes Cruising Company make Holland a port of call.

About one million tourists visit Tulip Time each year, for which the community finds innovative ways to enhance self-funded projects. It has been ranked as America's third largest town festival and was named Reader's Digest's best small town festival. The Tulip Time Festival has attracted big name acts in recent years such as: Christina Aguilera in 2000, O-Town in 2001, The Verve Pipe in 2004, and Jars of Clay in 2006. Ed McMahon visited Tulip Time in 2007 along with Bobby Vinton. Comedian Bill Cosby headlined the 2014 Tulip Time Festival.

Holland is located on Lake Macatawa, near the shores of Lake Michigan. Scattered along the shoreline are many public beach accesses. The best known are Holland State Park and Tunnel Park. Smaller beaches along Lake Michigan are present but not well marked. Public accesses are frequent along dead-end streets bordering the shoreline.

The city's primary shopping district is centered along 8th Street, the city's main street downtown. Retailers include a diverse selection of locally owned small businesses and restaurants including Home & Company, The Outpost and JB & Me, as well as national brands, such as White House Black Market, Jos. A Bank and Talbots. Restaurants include Lemonjello's Coffee, JP's Coffee, New Holland Brewing Company, Curragh Irish Pub, 84 East, Jimmy John's and many others.

The 8th Street business district features a thermal snow - melting system which uses cooling water from the local electric plant. In 1988, the city rebuilt the entire street and sidewalk system, installing the thermal pipes underneath. The system will melt up to an inch an hour down to 15°. 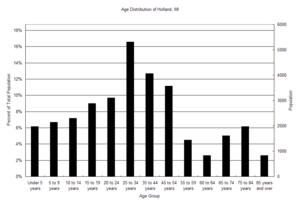 A graph showing the age distribution of Holland, MI

There were 12,021 households of which 32.8% had children under the age of 18 living with them, 46.5% were married couples living together, 11.9% had a female householder with no husband present, 4.7% had a male householder with no wife present, and 36.8% were non-families. 29.8% of all households were made up of individuals and 13.5% had someone living alone who was 65 years of age or older. The average household size was 2.52 and the average family size was 3.13.

The city and surrounding area is served by the MAX (Macatawa Area Express) transportation system, which offers both on-demand and high-speed bus service, linking different parts of the city as well as commercial, medical and government locations outside the city. This service evolved from the former "Dial-A-Ride Transportation" (DART) system.

The city is served by the following highways:

All content from Kiddle encyclopedia articles (including the article images and facts) can be freely used under Attribution-ShareAlike license, unless stated otherwise. Cite this article:
Holland, Michigan Facts for Kids. Kiddle Encyclopedia.