Niles is a city in Berrien and Cass counties in the U.S. state of Michigan, near South Bend, Indiana. In 2010, the population was 11,600 according to the 2010 census. It is the larger, by population, of the two principal cities in the Niles-Benton Harbor Metropolitan Statistical Area, an area with 156,813 people.

Niles lies on the banks of the St. Joseph River, at the site of the French Fort St. Joseph, which was built in 1697 to protect the Jesuit Mission established in 1691. After 1761, it was held by the British and was captured on May 25, 1763, by Native Americans during Pontiac's Rebellion. The British retook the fort but it was not re-garrisoned and served as a trading post. During the American Revolutionary War, the fort was held for a short time by a Spanish force. The occupation of the fort by the four nations of France, Britain, Spain, and the United States has earned Niles the nickname City of Four Flags.

The town was named after Hezekiah Niles, editor of the Niles Register, a Baltimore newspaper. The town of Niles as it exists today was settled in 1827. Between 1820 and 1865, Niles was an integral part of the Underground Railroad, helping slaves escape from as far south as New Orleans through the Heartland, and eventually into Canada.

The city is situated on the St. Joseph River and is mostly surrounded by Niles Township. Glacial deposits of large boulders and smooth stones mingle with heavy sedimentary deposits, producing rolling hills and steep river banks. The soil is rich and fertile. Crinoida and related fossils are easily found south of the city. 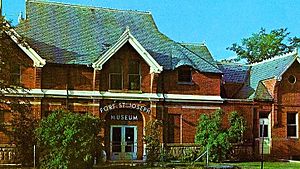 The Riverfront Park in Niles stretches about a mile and a half of the St. Joseph River. The park and the immediate surrounding down town area is the main stage for many of the city's seasonal cultural events, including the Niles Riverfest, the Bluegrass Festival, the Hunter Ice Festival, and the Apple Festival Parade. The park also includes the Armed Forces Memorial, public stage, City's free skateboard park, playground, and sand volleyball courts. Niles includes two other smaller but still notable parks. The Saint Joseph River Park, parts of which are now being excavated, is south of the French Paper Mill Factory Dam and includes part of the original Fort St. Joseph. Archaeologists from Western Michigan University have uncovered numerous artifacts at this location. Excavations are ongoing, and in the summer they host an "Open House" that allows patrons to visit the dig site, see displays of some of the artifacts, and also see demonstrations of historical reenactments. Niles also has a small park, Island Park, that is on an island in the middle of the St. Joseph River. The park has been known to become completely submerged during high flood waters.

In 2003, the City of Niles was awarded a MEDC Community Development Block Grant which, together with private and city funds, allowed for the removal of aluminum fronts from two blocks on Main St. Basic facade restoration along with streetscape improvements were also made, including brick sidewalks and numerous brick flower beds. The still fully functioning Jerry Taylor Airport, also the location of the City's annual Fourth of July celebration, lies at the eastern edge of the City.

Near Niles to the northwest is Fernwood Botanical Garden and Nature Preserve. Barron Lake and its adjacent community is to the east. The University of Notre Dame is six miles to the south in South Bend, Indiana.

The two rail lines currently serving Niles are Amtrak's Blue Water and Wolverine services. The Blue Water line serves the Port Huron-Chicago route. The Wolverine line serves the Pontiac-Chicago route. Freight service provided by the Norfolk Southern Railway. However, it was once served by several other lines. The Amtrak line was the Michigan Central Railroad's main line, opened through Niles in 1848 and 1849. The St. Joseph Valley Railroad opened in 1870 as the Michigan Central's South Bend Branch, and the Michigan Air-Line Railroad, leased to the Michigan Central, opened a line heading east from Niles in 1871, known as the Air Line Branch. The final line through Niles was the southeast-northwest Benton Harbor Branch of the Cleveland, Cincinnati, Chicago and St. Louis Railway (also known as the Big Four), originally opened by the Elkhart, Niles and Lake Michigan Railroad in 1881. All of these lines were part of the New York Central Railroad system. The Air Line Branch was abandoned at Niles in 1937, and the Benton Harbor Branch (Big Four) was removed north of Niles in 1980. The South Bend Branch was removed later that decade.

The Amtrak station is located along the main line east of the former Benton Harbor Branch crossing and west of the former junctions with the South Bend and Air Line Branches. Amtrak uses the old Michigan Central station; the current structure was built in 1892 and is listed on the National Register of Historic Places. Scenes in films such as Continental Divide, Midnight Run and Only the Lonely were shot here. Baggage cannot be checked at this location; however, up to two suitcases in addition to any "personal items" such as briefcases, purses, laptop bags, and infant equipment are allowed on board as carry-ons.

Niles is served by Niles Dial-A-Ride Transportation System (DART). The service has been running since 1974. It is run by Niles City Council and operated under contract by McDonald Transit. The agency is based in the same building as the city's Amtrak station. In addition to Dial-a-Ride service, it offers fixed route service via Route 2. The route runs through Niles throughout the weekdays. As of January 1, 2011, it also stops at South Bend, Indiana once every two hours. The route connects to South Bend TRANSPO Route 5 at Auten Road/Route 933 intersection.

All content from Kiddle encyclopedia articles (including the article images and facts) can be freely used under Attribution-ShareAlike license, unless stated otherwise. Cite this article:
Niles, Michigan Facts for Kids. Kiddle Encyclopedia.