Cheboygan County is a county in the U.S. state of Michigan. As of the 2010 census, the population was 26,152. The county seat is Cheboygan. The county boundaries were set off in 1840 and county government organized in 1853.

Etymology of the name Cheboygan

The name of the county shares the same origin as that of the Cheboygan River, although the precise meaning is no longer known. It may have come from an Ojibwe word zhaabonigan, meaning "sewing needle". Alternatively, the origin may have been Chabwegan, meaning "a place of ore". It has also been described as "a Native American word first applied to the river. See List of Michigan county name etymologies.

Cheboygan County had another township called Maple Grove Township which became part of Forest Township in 1942. 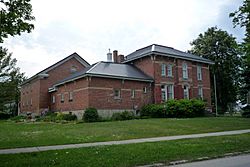 There are eight recognized Michigan historical markers in the county:

All content from Kiddle encyclopedia articles (including the article images and facts) can be freely used under Attribution-ShareAlike license, unless stated otherwise. Cite this article:
Cheboygan County, Michigan Facts for Kids. Kiddle Encyclopedia.