Otsego may be a Native American name meaning "place of the rock". However, an alternative theory is that it derives from a lake and a county in New York state, which are said to bear the name derived from a Mohawk Iroquoian word meaning either "clear water" or "meeting place." It may be a neologism coined by Henry Schoolcraft, who was a borrower of words and pieces of words from many languages (including Arabic, Greek, Latin, and various American Indian dialects). See List of Michigan county name etymologies. 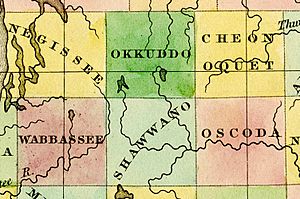 A detail from A New Map of Michigan with its Canals, Roads & Distances (1842) by Henry Schenck Tanner, showing Otsego County as Okkuddo County, its name from 1840 to 1843. Several nearby counties are also shown with names that would later be changed.

The county was initially created in 1840 as Okkuddo County (meaning "sickly water," although the reason for using a name with such a negative meaning is lost). The name was changed to Otsego in 1843. It was organized in 1875.

Otsego County has more than 370 lakes. Most of the lakes are in the southern part of the county. Three miles south of Gaylord, Otsego Lake, is the county's largest, and has a surface area of 1,972 acres (7.98 km2). Other large lakes in the southern part of the county include Big Lake, Big Bear Lake, Buhl Lake, Crapo Lake, Dixon Lake, Douglas Lake, Guthrie Lake, Heart Lake, Lake Tecon, Manuka Lake, Opal Lake, Pencil Lake, and Turtle Lake. The larger lakes in the northern part of the county are Five Lakes, Hardwood Lake, Lake Twenty Seven, and Pickerel Lake. Many of these are so-called 'kettle lakes,' formed by the melting of blocks of glacial ice, left as the glacier retreated, which created a depression in the soil.

Headwaters of the Au Sable, Black, Manistee, Pigeon, and Sturgeon Rivers are in Otsego County. The Au Sable River watershed is the largest watershed in the county. These watersheds drain large portions of the county, and are significant to the environment and a foundation of its habitat.

Gaylord Regional Airport is owned and operated by Otsego County. It is located at 1100 Aero Drive, Gaylord, MI 49735. (989) 732-4218 Phone. The Airport is licensed by the Michigan Aeronautics Commission as a General Utility Airport. It is listed as a tier one airport in all categories of the Michigan Airport System Plan.

All content from Kiddle encyclopedia articles (including the article images and facts) can be freely used under Attribution-ShareAlike license, unless stated otherwise. Cite this article:
Otsego County, Michigan Facts for Kids. Kiddle Encyclopedia.