Montmorency County is a county located in the U.S. state of Michigan. As of the 2010 census, the population was 9,765. The county seat is Atlanta. 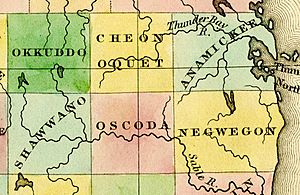 A detail from A New Map of Michigan with its Canals, Roads & Distances (1842) by Henry Schenck Tanner, showing Montmorency County as Cheonoquet, the county's name from 1840 to 1843. Several nearby counties are also shown with names that would later be changed.

The county was created by the Michigan Legislature in 1840 as Cheonoquet County, after a well known Chippewa (also known as Ojibwa) Chief, whose name meant Big Cloud. Cheonoquet took part in Indian treaties in 1807, 1815, 1825 and 1837. Renamed Montmorency County on March 8, 1843, it was originally spelled Montmorenci, and historians conjecture this reflects the area's French-Canadian influence: the French Duke of Montmorency purchased a lieutenant governorship in Canada and the first archbishop of Canada--Montmorency-Laval--both could be influences on the county's name. (There was no "Count Morenci" aiding the American Revolution). The county was organized in 1881. The reason for the change in spelling is subject to some dispute. See List of Michigan county name etymologies. The name Montmorency probably means Mountain Moor. Montmorency is very much a boggy land or moor that is at the top of a broad mount or highland. When the county was formed in 1881, some land area was taken from Cheboygan and Alpena counties. Three townships were divided, namely Briley, Montmorency and Rust. By 1901 Albert, Hillman and Wheatfield were added. Brush Creek, now known as Hillman, was the first county seat. In 1891 the county seat was moved to Atlanta.

Most of the county is covered by state forest land. There is and has been an abundance of lakes. Glaciers shaped the area, creating a unique regional ecosystem. A large portion of the area is the so-called Grayling outwash plain, which consists of broad outwash plain including sandy ice-disintegration ridges; jack pine barrens, some white pine-red pine forest, and northern hardwood forest. Large lakes were created by glacial action.

There are no traffic lights in Montmorency county, a few blinking lights are scattered about at highway junctions.

ORV/ATV and snowmobile trails are considered some of the best in the state of Michigan, many areas are designated as "trail mazes" on some maps. Montmorency county is one of a few counties that allow ATVs on public county roads, thus creating access for fuel, food and various hotels to Hillman, Atlanta, and Lewiston. The main trail system incorporates a scenic Elk tour and various levels of ATV trails.

Montmorency County is home to Michigan's most endangered species and one of the most endangered species in the world: the Hungerford's crawling water beetle. The species lives in only five locations in the world, two of which are in Montmorency County, both inside the Mackinaw State Forest. The first site is along the East Branch of the Black River where two adult beetles were found in surveys in 1989 and two more again in 1996. In July 1999, six additional adult beetles were identified in the county living in Van Hetton Creek. This latter find was significant as it represented a new location beyond those originally identified when the Hungerford's crawling water beetle was categorized as endangered on March 7, 1994, under the provisions of the U.S. Endangered Species Act. The Van Hetton Creek sighting therefore provides the possibility that more of these very rare beetles might be found elsewhere in Montmorency County.

All content from Kiddle encyclopedia articles (including the article images and facts) can be freely used under Attribution-ShareAlike license, unless stated otherwise. Cite this article:
Montmorency County, Michigan Facts for Kids. Kiddle Encyclopedia.