Morchella, the true morels, is a genus of edible mushrooms closely related to the cup fungi. These appear honeycomb-like in that the upper portion is composed of a network of ridges with pits between them. 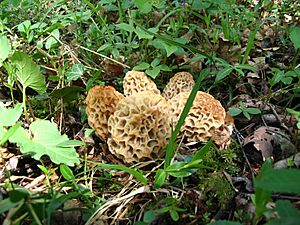 Morels are a feature of many cuisines, including Provençal. Their unique flavor is prized by chefs worldwide, with recipes and preparation methods designed to highlight and preserve it. As with most edible fungi, they are best when collected or bought fresh. One of the best and simplest ways to enjoy morels is by gently sauteeing them in butter, cracking pepper on top and sprinkling with salt. They make great additions to meat and poultry dishes, soups, or can be used as pasta fillings. However, as morels are known to contain thermolabile toxins, they must always be cooked before eating. 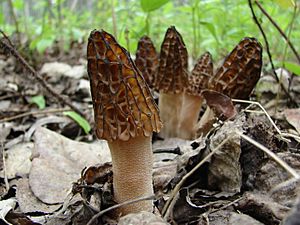 Morels can be preserved in several ways: They can be 'flash frozen' by simply running under cold water or putting them in a bucket to soak for a few minutes, then spread on a baking tray and placed into a freezer. After freezing, they keep very well with the frozen glaze for a long time in airtight plastic containers. However, when thawed they can sometimes turn slightly mushy, so they are best frozen after steaming or frying. Due to their natural porosity, morels may contain trace amounts of soil which cannot be easily washed out. Any visible soil should be removed with a brush, after cutting the body in half lengthwise, if needed. Mushroom hunters sometimes recommend soaking morels in a bowl of salt water briefly prior to cooking, although many chefs would disagree.

Drying is a popular and effective method for long-term storage, and morels are widely available commercially in this form. Any insect larvae which might be present in the fruit bodies usually drops out during the drying process. Dried morels can then be reconstituted by soaking for 10–20 minutes in warm water or milk, and the soaking liquid can be used as stock.

The supreme flavour of morels is not just appreciated by humans; in Yellowstone National Park, black morels are also known to be consumed by grizzly bears (Ursus arctos horribilis).

Morchella species are thought to contain small amounts of hydrazine toxins or an unknown toxin that are destroyed through cooking, (the presence of hydrazine is controversial since there are no primary references of hydrazine having been detected in the species); because of this, morels should never be eaten raw. It has been reported that even cooked morels can sometimes cause symptoms of upset stomach when consumed with alcohol.

When eating this fungus for the first time it is wise to consume a small amount to minimize any allergic reaction. As with all fungi, morels for consumption must be clean and free of decay. Morels growing in old apple orchards that had been treated with the insecticide lead arsenate may accumulate levels of toxic lead and arsenic that are unsuitable for human consumption.

All content from Kiddle encyclopedia articles (including the article images and facts) can be freely used under Attribution-ShareAlike license, unless stated otherwise. Cite this article:
Morchella Facts for Kids. Kiddle Encyclopedia.