Antrim County is a county located in the U.S. state of Michigan. As of the 2010 census, the population was 23,580. The county seat is Bellaire. The name is taken from County Antrim in Northern Ireland.

YMCA Camp Hayo-Went-Ha, the oldest American summer camp that sits on its original site, occupies about one square mile on the shore of Torch Lake in Central Lake Township. Boys first attended Hayo-Went-Ha (variant of Hiawatha) in 1904. 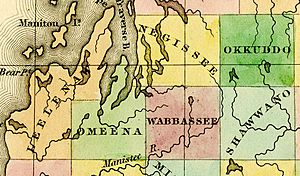 A detail from A New Map of Michigan with its Canals, Roads & Distances (1842) by Henry Schenck Tanner, showing Antrim County during the period when it was named Meegisee County, its name from 1840 to 1843. The name is misspelled as "Negissee" on the map. Several nearby counties are also shown with names that would later be changed.

The county was formed in 1840 as Meegisee County. Meegisee (meaning "eagle"), was the name of a Chippewa chief who signed the 1821 Treaty of Chicago and the 1826 Treaty of Mississinwas.

It was renamed Antrim County in 1843, one of the Irish or Scots Irish names given to five renamed Michigan counties at that time, supposedly in deference to the increasing number of settlers of Irish and Scots Irish heritage in Michigan at that time. In the text of the 1843 legislative act, the name was misspelled as "Antim".

Separate county government was organized in 1863. The county seat was originally located in Elk Rapids, but was moved to Bellaire in 1904 after 25 years of litigation. In 1950 its population was 10,721.

The county is considered to be part of Northern Michigan. Glaciers shaped the area, creating a unique regional ecosystem. A large portion of the area is the so-called Grayling outwash plain, which consists of broad outwash plain including sandy ice-disintegration ridges; jack pine barrens, some white pine-red pine forest, and northern hardwood forest. Large lakes were created by glacial action.

There were 9,222 households out of which 26% had children under the age of 18 living with them, 57.30% were married couples living together, 8.30% had a female householder with no husband present, and 30% were non-families. 25.3% of all households were made up of individuals and 11.50% had someone living alone who was 65 years of age or older. The average household size was 2.36 and the average family size was 2.78.

All content from Kiddle encyclopedia articles (including the article images and facts) can be freely used under Attribution-ShareAlike license, unless stated otherwise. Cite this article:
Antrim County, Michigan Facts for Kids. Kiddle Encyclopedia.