Grand Traverse Bay is a deep bay of Lake Michigan formed by the Leelanau Peninsula in the northwestern Lower Peninsula of Michigan. The bay is 32 miles (51 km) long, 10 mi (16 km) wide, and up to 620 feet (190 m) deep in spots. It is divided into two arms by the Old Mission Peninsula. The entire bay is conterminous with the Grand Traverse Bay Bottomland Preserve. It should not be confused with Grand Traverse Bay of Lake Superior, located on the Keweenaw Peninsula.

Traverse City is situated at the south end of the bay where the Boardman River empties into the west arm. Cherry orchards line the bay region, giving rise to Traverse City's claim to be the Cherry Capital of the World. Several nationally known companies offer cherry-based products made with Northern Michigan tart cherries including Traverse Bay Farms, Cherry Central, Fruit Advantage, American Spoon, Cherry Republic and Old Mission Traders (formerly Cherry Stop). The region is the center of cherry production in Michigan.

The most notable feature of the bay is that it is bisected into East and West arms by the Old Mission Peninsula. In addition, Grand Traverse is divided further into several important smaller bays, including Northport Bay, Suttons Bay, Omena Bay, Bowers Harbor, and Old Mission Bay. Northport Bay, located at the northwest corner of Grand Traverse Bay is about 10 mi (16 km) long and 4 miles (6.4 km) wide. Northport Bay open to the east, except inside the arms at each end, with the Leelanau Peninsula on the West side. There are several shoals in Northport Bay marked by buoys. Bellow Island, a low gravel island covered by shrubs and located near the middle of Northport Bay, is owned by the Nature Conservancy; it is primarily known as a bird rookery, and is sometimes locally called Gull Island.

There are several marinas on the bay, including the large marinas in Northport, Greilickville, Traverse City, and Elk Rapids. 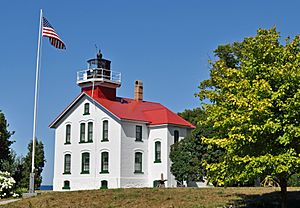 The Grand Traverse Lighthouse at the tip of the Leelanau Peninsula, which anchors the bay to the west.

An inferior mirage over the bay 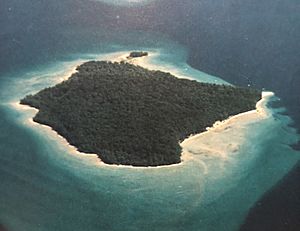 Power Island, the largest island in the bay.

Grand Traverse Bay earned its name from 18th-century French voyageurs who made la grande traverse, or "the long crossing", across the mouth of bay. The area was owned by the French, followed by Great Britain as the Province of Quebec. After 1776, the area was owned by the Americans. On Old Mission peninsula, Rev Peter Doughtery started the first permanent settlement in 1839. This was called "Grand Traverse", but was later renamed to Old Mission. 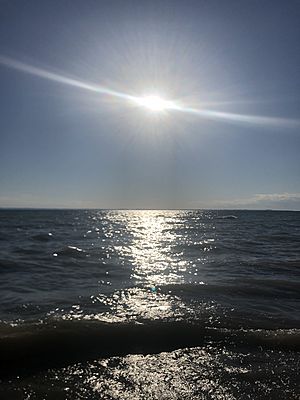 Grand Traverse Bay from near Norwood, near the site of the original crossing by Jacques Marquette. In the background is northern Leelanau County 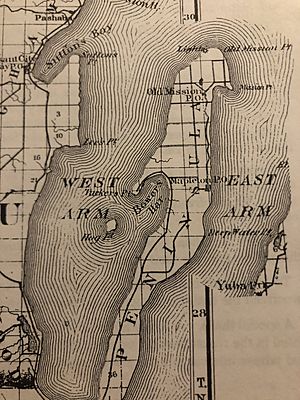 Besides cherries, the surrounding countryside produces grapes and is one of the centers of the Michigan wine industry. Known for its shimmering blue water and golden sand beaches, the Grand Traverse Bay region is a popular vacation destination.

In September 2007, Mark Holley, an underwater archeologist with the Grand Traverse Bay Underwater Preserve Council who teaches at Northwestern Michigan College in Traverse City, said that they might have discovered a boulder 3.5 to 4 feet (1.1 to 1.2 m) high x 5 feet (1.5 m) long) with a prehistoric carving in the Grand Traverse Bay. The granite rock has markings that resemble a mastodon with a spear in its side. Confirmation that the markings are an ancient petroglyph will require more evidence. The stone can bee seen in a tv documentary, and is pictured on page 9 of New Scientist Magazine of July 19, 2008.

All content from Kiddle encyclopedia articles (including the article images and facts) can be freely used under Attribution-ShareAlike license, unless stated otherwise. Cite this article:
Grand Traverse Bay Facts for Kids. Kiddle Encyclopedia.