Peshawbestown is an unincorporated community in Suttons Bay Township of Leelanau in the U.S. state of Michigan. In historical documents, the name is spelled variously as Peshabetown, Peshabatown, Pshawbatown, Preshabestown.

The community is on M-22 about 10 miles (16 km) south of Northport, 4 miles (6.4 km) north of Suttons Bay, and about 20 miles (32 km) north of Traverse City. It is on the east side of the Leelanau Peninsula on the western shore of the Grand Traverse Bay. 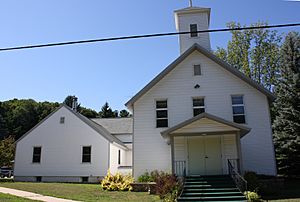 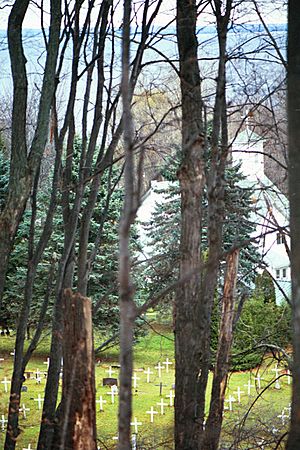 Peshawbestown today sits on 12.5 acres (51,000 m2) of the Grand Traverse Band of Ottawa and Chippewa Indians reservation. The primary economic driver of the community is tourism, with the main feature being the Leelanau Sands Casino. Other notable feature include the historic Kateri Tekakwitha Catholic Church and the annual Peshawbestown Pow-Wow, which takes place each August with native foods, tribal art, and dancing.

It began as a Catholic mission to the people of the Chippewa and Ottawa around 1850. A February 12, 1911, Detroit Free Press article quoted by Powers describes the village as "two long rows of log cabins, built in 1849." Powers, who calls the place Pshawbatown, indicates, that Father Ignatius Mrak brought Chippewas from Sault Ste. Marie here in 1849; however, the Catholic Encyclopedia indicates that from 1849-1851, Mrak was assisting Father Francis Pierz in Arbre Croche (near Harbor Springs on the Little Traverse Bay. Romig indicates that the mission was begun by Rev. Angelus Van Praemel in 1852, with Mrak, who referred to it as Eagletown, succeeding him in 1855. Romig writes that Mrak's successor, the "Rev. Phlip Zorn, calls it as Peshaube, after its then ruling chief Peshaba; from 1895 on, Rev. Bruno Torka, O.F.M., who was next in charge, calls it Peshawbeston. 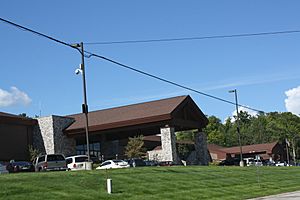 All content from Kiddle encyclopedia articles (including the article images and facts) can be freely used under Attribution-ShareAlike license, unless stated otherwise. Cite this article:
Peshawbestown, Michigan Facts for Kids. Kiddle Encyclopedia.