The Boardman River is a 28.2-mile-long (45.4 km) river that flows into the west arm of Grand Traverse Bay in Traverse City, Michigan. The Boardman's upper tributaries rise near Kalkaska, Michigan, and its watershed drains an area of 295 square miles (760 km2) through 130 miles (210 km) of river and tributaries. The Boardman River is considered one of the top ten trout streams in Michigan. Before entering the Grand Traverse Bay, it becomes Boardman Lake, a natural lake that was originally 259 acres (1.05 km2) in size and increased to 339 acres (137 ha) after the Union Street Dam was constructed in 1867. After flowing through Boardman Lake, the river descends through downtown Traverse City, following a hairpin-shaped course to Grand Traverse Bay. This Traverse City section of the Boardman River is accessible by motorboat from the lakeshore up to a weir upstream from the lakeshore. A short distance upstream from the weir is the Union Street Dam, a small decommissioned mill dam located between Cass and Union streets. The river's principal tributaries are Kids Creek, Beitner Creek, Swainston Creek, and the North and South branches of the river.

In the year 1847, Captain Horace Boardman of Naperville, Illinois, purchased land on the Grand Traverse Bay. He was the namesake of the Boardman River, which had previously been known as the Ottawa River.

Later in 1800s, as Traverse City was first being settled, the Union Street Dam was being built by the Hannah-Lay Company as a saw mill. Around this time, citizens were dumping sewage into the Boardman, which was causing severe health problems.

In 1869, Boardman Lake became a great tourist attraction for the citizens of Traverse City. The Oval Wood Dish Company built a factory on the northwestern shores of the lake. The western shore of the lake was used for a log rollaway and rail yard on the Great Lakes Central Railroad, up until the early 2000s.

In 1894, the Boardman Dam was being built 4.6 miles (7.4 km) upstream from the Union Street Dam as a hydroelectric power plant. The building of this dam created Boardman Pond and diverted the stream. This ancient flow channel is called the relic channel.

The Sabin, Keystone, and Brown Bridge dams were built during the oncoming years. The building of the Keystone Dam flooded the small towns of Beitner and Keystone. Over time, these dams withstood many floods, and in 2013, the Brown Bridge Dam was removed, draining Brown Bridge Pond. The Keystone Pond was demolished sometime in the 1960s.

Boardman Lake is one of two bodies of water on the mainstream Boardman River (the other being Sabin Pond). It is the largest body of water on the river, and always has been. It is located about 1.65 miles (2.65 km) upstream from the mouth of the river in Grand Traverse Bay. When the Union Street Dam was built in 1894, the size of Boardman Lake grew by about 33.3%.

This lake is also a popular recreational and fishing lake. It has an abundance of Bluegill, Largemouth Bass, Northern Pike, Smallmouth Bass, Sunfish, Walleye, and Yellow Perch.

The lake is an important part of the course of the Boardman River and the history of Traverse City. 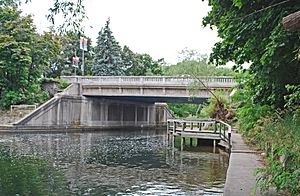 Three dams on the river are being removed: Sabin, Boardman and Brown Bridge. On October 6, 2012, a temporary structure put in place to facilitate drawdown at Brown Bridge Dam was breached, flooding the river valley. In June 2014 the Michigan DEQ issued a report identifying erosion around the temporary drawdown structure as the likely cause of the failure.

Brown Bridge Dam removal was completed in January 2013 and resulted in the reestablishment of 2.5 miles of river channel. Revegetation and restoration work in the project area is ongoing. In preparation for the removal of the Boardman and Sabin Dams, both spillways have been opened and the impoundments have been drawn down as low as permitted by the permanent structures in place today. A new two-lane bridge on Cass Road crossing the Boardman River was built just downstream of the former Boardman Dam prior to dam removal. Deconstruction and removal of the Boardman Dam was complete in October 2017. Sabin Dam was fully removed by the end of 2018. 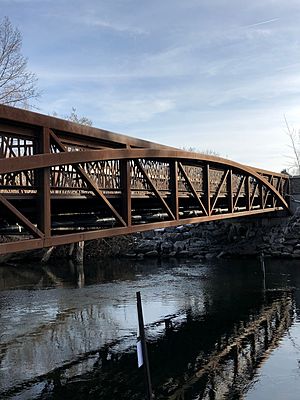 In March 2016, Grand Traverse County Road Commission Officials announced the closure of the One-Lane Cass Road Bridge near Keystone Road in Southern Garfield Township. This would lead to the demolition and reconstruction of a new modern-style bridge arch-bridge over the channel between Keystone and Sabin ponds. On March 28, the bridge closed for good, creating a detour along South Airport, U.S. 31, and Beitner Roads to Keystone Road. In September that year, the new bridge opened, but the old bridge was still standing. In Summer and Fall 2017, The Grand Traverse County Road Commission removed the old bridge, and the river was rerouted under the newer bridge. 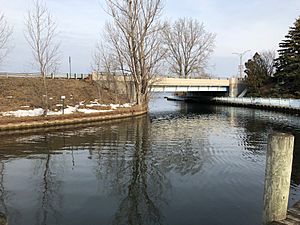 The new Murchie Bridge in January 2018

Including Boardman Lake, the Boardman River system drains all or portions of the following municipalities:

All content from Kiddle encyclopedia articles (including the article images and facts) can be freely used under Attribution-ShareAlike license, unless stated otherwise. Cite this article:
Boardman River Facts for Kids. Kiddle Encyclopedia.