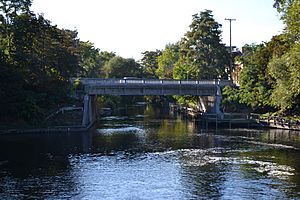 In 1921, the City of Traverse City built a hydropower dam 18.5 miles (29.8 km) upstream from the Grand Traverse Bay known as the Brown Bridge Dam. It was made of earthen materials and concrete. The dam, and all other dams on the Boardman River, stopped producing hydropower in 2005. The dam failed in October 2012 and was removed in 2013. The once large Brown Bridge Pond created by the dam is now a hilly field with varied wildlife. The area is now the Brown Bridge Quiet Area, which has been greatly extended since the dam removal.

The Boardman Dam was originally built in 1894, and reconstructed in 1930. It and the large earthen dam created the Keystone Pond. The dam was demolished in 2017 and Keystone Pond was drained. The river was rerouted under the new Cass Road Bridge.

In the years leading up to 2016, the one-lane Cass Road Bridge over the Boardman River was becoming more and more obsolete.

In May 2016, the Grand Traverse County Road Commission started building a new bridge. The old bridge was still to be in use until summer of the next year. The river was still flowing under the older one-lane Cass Road bridge and through the dam, and the new bridge was situated over grass.

In June 2017, Phase II of the project was started. The earthen dam upholding Keystone Pond was partially demolished so that the river could flow in a controlled path under the new bridge, built the prior year. Cass Road was closed later on, with the Boardman Dam and one lane bridge demolished, Keystone Pond drained and water flowing under the newer bridge. The section of road where the one lane bridge used to be is elevated above the surrounding land because of the prior location of the bridge.

All content from Kiddle encyclopedia articles (including the article images and facts) can be freely used under Attribution-ShareAlike license, unless stated otherwise. Cite this article:
Boardman River Dams Ecosystem Restoration Project Facts for Kids. Kiddle Encyclopedia.