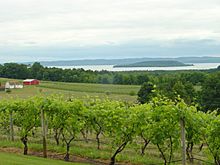 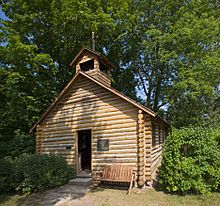 A replica of the Old Mission for which the peninsula is named.

The settlement at Old Mission was the first community founded by Europeans in the Grand Traverse Bay region. It was founded in May, 1839 by Rev. Peter Dougherty and Rev. John Fleming. They had spent the winter on Mackinac Island, and founded a Presbyterian mission at the small Old Mission Harbor, which of course did not yet have that name. At the time of their arrival there were a few Native American residents of a nearly abandoned village at the harbor, and the mission had peaceful relations with those and other native residents in the surrounding area.

In June that year Henry Schoolcraft arrived at the mission in a small vessel and helped found a school there. By 1841 there were 5 log buildings as well as several wigwams at the settlement. By 1850 the settlement had grown to a considerable size, and the schooner Arrow was making weekly trips to the mission from Mackinaw City.

A pastoral farm scene located on the peninsula.

In 1852 Rev. Dougherty decided to move his mission across the west bay along the Leelanau Peninsula to an existing Native American village at the site of modern Omena, Michigan, thus establishing a "New Mission." The previous community was therefore already known as the "Old Mission" in the early 1850s. By the time of the civil war, the Presbyterian organization which funded Dougherty had financial difficulty, and missionary activities were discontinued. Dougherty sold his land there in 1868. 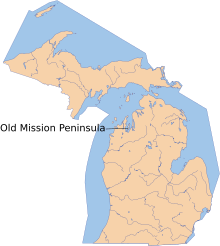 There were 2,131 households out of which 27.5% had children under the age of 18 living with them, 70.4% were married couples living together, 4.7% had a female householder with no husband present, and 23.7% were non-families. 20.6% of all households were made up of individuals and 10.5% had someone living alone who was 65 years of age or older. The average household size was 2.45 and the average family size was 2.84.

The peninsula's only distillery, Civilized Spirits are created in a forest hideaway. The site has a long tradition of distillation. Spirits have been made on the site since the late 1800s when it was built by lumber baron J.W. Stickney and his wife Genevive. Civilized Spirits philosophy is to make the best spirits possible with the best ingredients available and the smallest impact on the environment. Civilized continues the long-standing tradition with its line of spirits that are distilled from local ingredients. Civilized Spirits include: White Dog Whiskey, Whiskey, Rum, Gin, Single Malt Whiskey, Vodka, and its popular Sakura, a vodka distilled from cherries.

Nomad Cidery is in its early stages, expected to open on the peninsula fall 2014. Nomad cider is brewed on Old Mission peninsula and uses a variety of local apples.

Old Mission Peninsula is a popular wedding destination. One of the most popular venues is the Peninsula Room which opened in the spring for 2009. The spacious facility features all the modern amenities you would expect in a large format event space with up north elegance. But, as part of the historic Bowers Harbor Inn complex, the space is imbued with all the charm, intimacy and beauty that the north woods can provide.

All content from Kiddle encyclopedia articles (including the article images and facts) can be freely used under Attribution-ShareAlike license, unless stated otherwise. Cite this article:
Peninsula Township, Michigan Facts for Kids. Kiddle Encyclopedia.