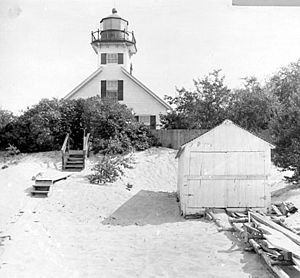 Vintage image of the lighthouse

Mission Point Light is a lighthouse located in the U.S. state of Michigan at the end of Old Mission Point, a peninsula jutting into Grand Traverse Bay 17 miles (27 km) north of Traverse City. When it was built in 1870, it was an exact copy of the Mama Juda Light (now destroyed), which was built on the Detroit River in 1866.

The foundation is natural and emplaced. The wooden structure is painted white with black trim. The square tower is attached to a dwelling.

A fixed white Fifth Order Fresnel lens was installed. The building was only one and one half stories tall. However, its placement on a sand bank 14 feet above the lake's surface created a lens focal plane of 47 feet (14 m). It was visible from 13 miles (21 km) at sea. Maintaining the dune and protecting it and the lighthouse from the deleterious effects of wave action has been a constant struggle.

For 67 years the light served to warn mariners about the shoals off the point. However, new techniques in offshore construction and the automation of lighthouse illumination made it possible to build a navigation aid on the shoal itself. In 1938, work began on a pier for the new light in 19 feet (5.8 m) of water, about 2 miles (3.2 km) northwest of Mission Point. The light ran on batteries. It was on a 36-foot (11 m) tall tower, and its focal plane of 52 feet (16 m) help make it visible for 13 miles (21 km). It had a 30-second dwell time between flashes, in order to conserve power.

Famously, the lighthouse stands a few hundred yards south of the 45th parallel north, halfway between the North Pole and the Equator. The lighthouse was deactivated in 1933 and purchased by the State of Michigan. There are a pair of signs that denote its location on the parallel, and it is one of 29 places (six are in Michigan) in the U.S.A. where such signs are known to exist.

The lighthouse is located in Old Mission State Park, which is managed by Peninsula Township as Lighthouse Park, at the northern end of M-37.

As reported in the Traverse City Record Eagle, in a unique program, the lighthouse society sought volunteers to work and live in the Mission Point Light during 2008. There is a fee, which will benefit the light.

In 2008, the building opened for the first time to the public (it will have a small museum), after serving for many years as the park manager's residence.

The area around the lighthouse attracts many cross country skiers. There is a boat launch there, which is favored by sea kayakers. The location is becoming increasingly popular, which has subjected it to environmental issues that are being addressed by Peninsula Township.

The Old Mission Peninsula is said to be a premier place to sea kayak. One gets close to shore, lighthouse, picnic grounds and parks. The bay offers a shelter from the prevailing westerly winds and from the Lake Michigan waves. Maps, rentals and guided tours are available.

Because of its form, surroundings and location, it is photogenic, having inspired photographs and illustrations, including drawings and needlepoint.

All content from Kiddle encyclopedia articles (including the article images and facts) can be freely used under Attribution-ShareAlike license, unless stated otherwise. Cite this article:
Mission Point Light Facts for Kids. Kiddle Encyclopedia.