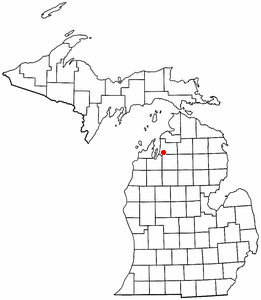 Alden is an unincorporated community and census-designated place (CDP) located in Helena Township in Antrim County in the U.S. state of Michigan. It is situated at the southeast end of Torch Lake, about 20 miles (32 km) northeast of Traverse City. The population of Alden was 125 at the 2010 census.

The community first began to develop after a store was built in Helena Township in 1868. The settlement that formed around it was initially called Noble. Because it was located at the mouth of Spencer Creek, the community became known as Spencer Creek and received a post office with that name on June 15, 1869. After the Pere Marquette Railway came to the town in 1891, the post office was renamed Alden on July 18, 1892, for William Alden Smith, who was an official with the railroad company. Smith later became a congressman and U.S. senator from Michigan.

All content from Kiddle encyclopedia articles (including the article images and facts) can be freely used under Attribution-ShareAlike license, unless stated otherwise. Cite this article:
Alden, Michigan Facts for Kids. Kiddle Encyclopedia.