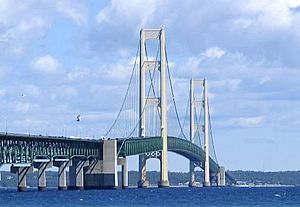 The Mackinac Bridge is a 5-mile-long (8-km.-long) bridge that carries a four-lane interstate highway, Interstate 75. It was built by the U.S. state of Michigan and connects that state's Upper Peninsula and Lower Peninsula together.

The Mackinac Bridge passes over a strait of water that connects two Great Lakes, Lake Michigan (to the west of the bridge) and Lake Huron (to the east).

At the center of the Mackinac Bridge is a long suspension span, in which the bridge, made of steel and concrete, hangs from wires that run down from two huge, curved cables.

The government agency that runs the Mackinac Bridge charges motor vehicles a toll to drive over it. In 2020, the toll was $4.00 for a passenger car.

The government hangs colored lights from the big cable, and turns them on at night so that the bridge can be seen from many miles away.

The Mackinac Bridge was opened in 1957, and this started a major economic boom in northern Michigan as tourists drove from all over North America to see the bridge, the Great Lakes, and the northern forests.

All content from Kiddle encyclopedia articles (including the article images and facts) can be freely used under Attribution-ShareAlike license, unless stated otherwise. Cite this article:
Mackinac Bridge Facts for Kids. Kiddle Encyclopedia.