Vermilion was initially settled in the early 19th century and incorporated as a village in 1837. The city took its name from the nearby Vermilion River. It developed as a fishing and small boat harbor. In 1847 the Congress of the United States built the Vermilion Lighthouse to aid navigation on Lake Erie.

As commerce grew in larger nearby cities, the Vermilion River proved inadequate to large commercial traffic. Later, recreational boating became very popular. During the early 20th century the area became known as a resort community, featuring many beaches and cottages. Most structures were eventually converted to year-round use; many still are used as summer homes or vacation houses. Linwood Park in Vermilion is a good example.

Merging with the nearby village of Vermilion-on-the-Lake in 1960, Vermilion became a city, straddling Lorain and Erie counties.

Vermilion was once known as the "Village of Lake Captains", with many beautifully maintained captains' homes in its historic district. The Harbour Town Historic District also features housing styles from the Victorian, Italianate, Arts and Crafts, and Queen Anne eras. The Vermilion River endows marina facilities with more than 3,000 boat slips and ramps for easy access to the lake.

The Harbour Town 1837 Historic District is located in downtown Vermilion. It is the focal point for many professional offices, the city administration, the Chamber of Commerce, restaurants, shops, and marinas. Community-wide revitalization efforts have been promoted since the 1970s, encouraging property owners and citizens to retain the unique charm of their businesses and homes while maintaining high standards of care and construction. The Vermilion Lagoons, located on the east side of the Vermilion River, is considered one of the first planned residential neighborhoods on the water in the country. Construction started in 1928 by Louis A. Wells, a Cleveland contractor, who bought the land. 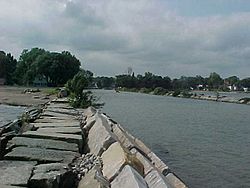 On summer nights, residents and visitors can congregate on the large deck at Main Street Beach to watch boats sail back and forth in front of the Lake Erie sunset and watch the Mystic Belle, a small paddle wheeler, offering rides on the Vermilion River. Children can attend a Sail Camp where they learn water safety and sailing. Vermilion is home to many world-renowned sailboat racers.

The Woollybear Festival is a one-day gathering that draws over 150,000 visitors to Vermilion and includes the longest parade in the state of Ohio. In the majority of years, the Vermilion High School Band Festival is held the night before the Woollybear Festival. Area high schools and the Vermilion High School Alumni Band take the field to entertain community members before the next day's parade.

The Festival of the Fish, held each June, is a three-day event, drawing people from Vermilion and the neighboring communities to take part in the Queen and Princess pageant, local talent concerts, parade, and concessions. Historic SummerFare, which features the Antique Craft and Boat Show, brings thousands of boat enthusiasts and aficionados to the harbor to see wooden boats from another era. Historic SummerFare also sponsors Antiques in the Park, the Community Chicken BBQ and Street Dance, and many family activities.

Concerts in the Park, sponsored by the Chamber of Commerce, occur during July and August each year. The concerts are open to everyone, free of charge, and feature a variety of entertainment from swing music to barbershop quartets. The Vermilion Area Archival Society, established in 2000, collects, stores, and indexes archival materials for research from the Vermilion area and provides assistance, as well as monthly programs, regarding the history and records of the area.

Vermilion has a wealth of art attractions. There are several art galleries in town that often display local works and hold showings of individual artists.

St. Mary's parochial school has been serving preschool and grades K-6 since 1956

All content from Kiddle encyclopedia articles (including the article images and facts) can be freely used under Attribution-ShareAlike license, unless stated otherwise. Cite this article:
Vermilion, Ohio Facts for Kids. Kiddle Encyclopedia.