Tobyhanna State Park is one of the state lands carved from a large artillery training range that preceded Tobyhanna Army Depot. According to the Pennsylvania DCNR,

The western boundary of Tobyhanna State Park is formed by a rail line once owned by Jay Gould. Gould, a native of New York, acquired an immense fortune during the Industrial Revolution, part of which included ownership of ten percent of all the rail tracks in the United States at the time of his death. One of his railroads passed by what is now the western boundary of the park. Gould was also the co-owner of a tannery in nearby Thornhurst. Raw hides were shipped from the western United States and Australia on the railroads owned by Gould to the village of Gouldsboro (just west of the park in Wayne County). The hides were then sent to Thornhurst by way of wagons traversing a plank road.

As of 2018, this rail line forms the dividing line between Tobyhanna State Park and Gouldsboro State Park in Monroe County. It is owned by the Pennsylvania Northeast Regional Rail Authority and operated by the Delaware-Lackawanna Railroad Co. Inc. Tourist excursions on this line are operated by Steamtown National Historic Site, and run from Steamtown's yard in Scranton to Tobyhanna, as well as other nearby destinations including Gouldsboro, Cresco, East Stroudsburg, and Delaware Water Gap. This rail line is part of the plan to resume passenger rail service between Scranton, PA and Hoboken, NJ via the Lackawanna Cutoff, with trains operated as part of the NJ Transit Rail System. 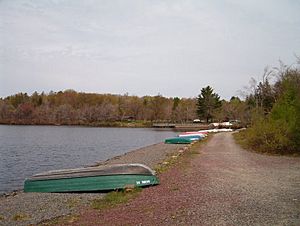 Rowboats and canoes can be rented at Tobyhanna Lake daily from Memorial Day Weekend to Labor Day, except in inclement weather. 60 overnight mooring spaces are available under permit. Boats must be registered and can only use electric motors. A sand beach (unguarded) is open from 8 am to sunset from late May to mid-September. 300 picnic tables and a reservable picnic pavilion are available throughout the year.

The trails in the park are well-marked; often half a dozen bright blazes of paint are visible at once. A 5.1-mile (8.2 km) blue-blazed trail circles the lake; it is level, well-cleared and generally gravelled; "Although not recommended for persons with disabilities, wheelchair users have completed the trail" A 3.3-mile (5.3 km) yellow-blazed trail extending northeast to Pennsylvania Route 196 and a 3.2-mile (5.1 km) red-blazed trail linking the park to Gouldsboro State Park to the northwest are more difficult to pass due to tree roots and stones.

The park is close to Interstate 380 to the west-southwest, and the western portion of the park suffers frequent vehicular noise. Some vehicle noise is also present to the south of the lake from Pennsylvania Route 423. (Light plane traffic emanates from the Mount Pocono Municipal Airport, approximately 4-mile (6.4 km) to the south. Other noise from park maintenance, constant restroom fans, vending machines, and residential neighbors affect the southern margin of the lake. The quietest portion of the park on marked trails is partway along the yellow trail north of its crossing of the Tobyhanna Creek, where natural sounds prevail a majority of the time.

A 1.2-acre (0.49 ha) ice skating area and a 5.5-mile (8.9 km) one-way snowmobile trail are designated during the winter. Ice fishing is popular, but ice thickness must be monitored by the user.

Five sites are available for organized group tenting of 20-40 people each. A 140-site camping area is available with hand-operated water pumps, flush toilets, and a dump station for trailers. There are several pet friendly sites. There is a pavilion and a separate picnic area, sandbeach, volleyball net as well as swimming in the Tobyhanna Lake.

The following state parks are within 30 miles (48 km) of Tobyhanna State Park:

All content from Kiddle encyclopedia articles (including the article images and facts) can be freely used under Attribution-ShareAlike license, unless stated otherwise. Cite this article:
Tobyhanna State Park Facts for Kids. Kiddle Encyclopedia.